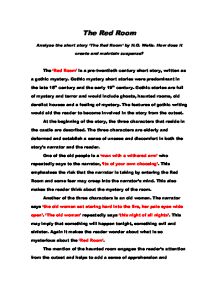 Analyse the short story 'The Red Room' by H.G. Wells. How does it create and maintain suspense?

The Red Room Analyse the short story 'The Red Room' by H.G. Wells. How does it create and maintain suspense? The 'Red Room' is a pre-twentieth century short story, written as a gothic mystery. Gothic mystery short stories were predominant in the late 18th century and the early 19th century. Gothic stories are full of mystery and terror and would include ghosts, haunted rooms, old derelict houses and a feeling of mystery. The features of gothic writing would aid the reader to become involved in the story from the outset. At the beginning of the story, the three characters that reside in the castle are described. The three characters are elderly and deformed and establish a sense of unease and discomfort in both the story's narrator and the reader. One of the old people is a 'man with a withered arm' who repeatedly says to the narrator, 'its of your own choosing'. ...read more.

This shows that he is still feeling uneasy. His journey to the room is illuminated by moonlight. The narrator walks down 'the long, draughty, subterranean passage'. The passage is long and narrow and the narrator may feel like things are closing up on him. There are many doors and it makes the reader feel as if someone may jump out at any moment. Then he walks up the spiral staircase, and hears echoes, which 'rang up and down the staircase'. This suggests that an evil presence may be lurking and that something is going to happen. In 'The Red Room', suspense is created by the alternating moods of the narrator. Once he enters the room, he takes a close look at the room. He says 'I began to walk about the room, peering round each article of furniture'. ...read more.

The characters create tension by making the reader and narrator feel as if the room is evil and sinister. The grotesque and distorted characters make the story more believable. On the narrator's journey to the room everything is set in dim light or dull surroundings. This creates tension as darkness is given a sinister presence. The reader is always kept wondering about why things are like what they are. The behaviour of the old people when the narrator mentions 'The Red Room' makes us wonder about the secrecy of the room and it make us jump to conclusions. The use of descriptive language evokes dramatic images, which build up a sense of fear and expectation There was nothing eerie about the room. The fright and the terror of the room were all in the narrator's mind. The story tells us that if you let fear into your mind it will control you. ...read more.