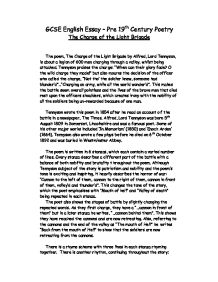 Analyse the techniques and literary devices used by the author in &quot;Charge of the Light Brigade&quot;

GCSE English Essay - Pre 19th Century Poetry The Charge of the Light Brigade The poem, The Charge of the Light Brigade by Alfred, Lord Tennyson, is about a legion of 600 men charging through a valley, whilst being attacked. Tennyson praises the charge: "When can their glory fade? O the wild charge they made!" but also mourns the decision of the officer who called the charge, "Not tho' the soldier knew, someone had blunder'd"..."Charging an army, while all the world wonder'd". This makes the battle seem overall pointless and the lives of the brave men that died rest upon the officers shoulders, which creates irony with the nobility of all the soldiers being un-rewarded because of one man. Tennyson wrote this poem in 1854 after he read an account of the battle in a newspaper, The Times. Alfred, Lord Tennyson was born 5th August 1809 in Somerset, Lincolnshire and was a famous poet. Some of his other major works included 'In Memoriam' (1850) and 'Enoch Arden' (1864). Tennyson also wrote a few plays before he died on 6th October 1892 and was buried in Westminster Abbey. ...read more.

especially when the officers orders them wrongly: "Their's not to make reply, their's not to reason why, their's but to do and die." This make the reader also feel sympathetic and saddened that such noble men were led to their death. "Mouth of death, Jaws of death, Valley of death and Mouth of Hell" are all repeated in the poem, which shows repetition but they are all related to death. This, once again, adds to the tone of war. They are also all personifications, which is one of the many literary devices used in this poem. Personifications in this poem are used to give things in the battle, human qualities, such as: "Mouth of hell...Jaws of Death". Tennyson uses punctuation to great extent, with words being shortened with apostrophes, exclamation and question marks also being used. These apostrophes are put in place of the 'e' in certain verbs: "Wonder'd...storm'd...thunder'd" and also "thro'...tho'". These are used to get the attention of the reader and to shorten the words. This makes the line shorter, so as the soldiers are charging, it quickens the pace. ...read more.

We can date the essay to pre-20th Century as at the beginning of the poem, the writer opens with "Half a league, half a league, half a league onward". A league is an old word meaning 3 miles. So half a league is about a mile and a half. "The shadow of the valley of death", Psalm 23, is usually read at funerals so this has an impact on the reader. If they know this verse in read at someone's death, then that will emphasise the feeling of death they have when they are reading a poem of war, with part of the same verse in. After the fury of the charge towards the cannons, the final words are gentle and make you reflect on the scenes beforehand: "Then they rode back, but not, Not the six hundred". This has an impact on the reader as now he reflects on the battle and is grateful to those who have lost their lives for their country. The reader is also surprised at the bravery of the soldiers, even though they knew they would probably die. They knew it was the wrong decision, but they just kept riding and did not question the officer's decision. ...read more.