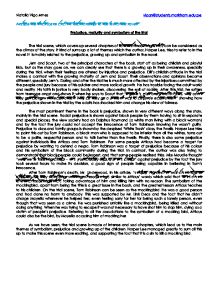 Analyse the trial scene and its relationship to the rest of the novel To Kill a mocking bird.

Analyse the trial scene and its relationship to the rest of the novel Prejudice, maturity and symbolism of the trial The trial scene, which covers up several chapters of To Kill a mocking bird, can be considered as the climax of the story. It kind of sums up a lot of themes which the author, Harper Lee, tries to refer to in the novel. It is mainly related to the prejudice, growing up and symbolism in the novel. Jem and Scout, two of the principal characters of the book, start off as being childish and playful kids, but as the story goes on, we can clearly see that there is a growing up in their awareness, specially during the trial, when their feelings are altered by Injustice and prejudice. Dill's childish attitude in the trial makes a contrast with the growing maturity of Jem and Scout. ...read more.

and by the fact the jury could not accept the innocence of Tom Robinson knowing he wasn't guilty. Prejudice to class and family groups is shown by the despised 'White Trash' class, the Ewells. Harper Lee tries to point this out by Tom Robinson, a black man who is supposed to be inferior than all the whites, turns out to be a polite, respectful person and to talk better than the Ewells. Finally, there is also some prejudice against individuals like Atticus and Tom Robinson. For some people Atticus had become a target for prejudice by wanting to defend a negro. Tom Robinson was a target of prejudice because of his colour and his symbolism of the black community during the trial. In contrast, the author was also trying to demonstrate that black people could be honest, and that some people realized thiss. ...read more.

This was supported by Mr. Link Deas and the fact that he didn't charge Mayella whenever he helped her, even feeling sorry for her for being such a lonely person, even though that was seen as a crime. He was punished unfairly like a mockingbird, being killed and without doing anything. When he was trying to escape it was not necessary to have shot him to stop him, dying as a victim of people's prejudice. Referring to all the associations to the symbolism of a mocking bird, Atticus could also be the bird, by Mayella accusing him of mocking her. As we have seen, the trial scene is made of intense and sad chapters, which lead us to the main themes of symbolism, prejudice and growing up of the children. Harper Lee managed greatly to sum all this up to make this scene even more exciting, and supporting the fact that it is a sin to kill a mocking bird. Natalia Vigo Ames vigon@students.markham.edu.pe ...read more.