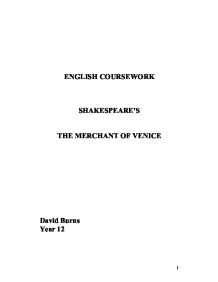 Analysis of Act IV scene 1, in three different versions of The Merchant Of Venice

ENGLISH COURSEWORK SHAKESPEARE'S THE MERCHANT OF VENICE David Burns Year 12 INTRODUCTION The three versions of the Merchant of Venice which I have watched are: 1. Channel 4 television version for their Schools Broadcasting Programmes 2. Trevor Nunn's version 3. National Theatre Company version directed by Jonathan Miller and starring Laurence Olivier as Shylock Act IV scene 1 is an intense scene in the play where we see many of the play's main themes such as justice and mercy, money and status, revenge, loyalty, love and prejudice and tolerance. Shakespeare presents a harsh character in Shylock the Jew, but the fact that he also gives him the chance to speak more than any other European playwright preceding him would suggest that his portrayal is not conventional but much more complex for example in his words in Act III scene 1, lines 57-58: "I am a Jew. Hath not a Jew eyes? Hath not a Jew hands, organs, dimensions?" Much of Shakespeare's enduring appeal has been in his amazing portrayal of the complexities of the human condition for example Hamlet or Macbeth. Traditionally Jews were the evil villains of Elizabethan drama, frequently Machiavellian or greedy but unlike his contemporaries Shakespeare's characters were never simply 'good' or 'evil' but embody the complex mix within each of us that makes us human. The main dilemma in staging this play today is in the consideration of Shakespeare's possible anti-semitism and/or sympathies towards his character and indeed whether Shylock only represents the Jewish people or whether he is symbolic of oppression of minority races in general. Through Shylock's forced conversion in this scene we are reminded of the conversions of other religions according to the ruler of the time such as Henry VIII. ...read more.

It also contrasts with Shylock's short punctuated sentences. When Portia suggests that Shylock will be blessed in return for showing mercy it is loaded with irony as at the end he is granted mercy regardless of not having done the same. Shylock's patience seems to be running out when he challenges Portia's words: "My deeds upon my head, I crave the law, the penalty and forfeit of my bond". I imagine this said with controlled anger. Throughout this speech Shylock remains determined and unmoved. He continues to make religious references and begins to compliment Portia on her apparent wisdom. He recites passages from his bond one imagines in a tone of expectation at things going his way. When Bassanio and Gratiano speak with great emotion of their own wives whom they would sacrifice for Antonio's sake, their words are contrasted with Shylock's to great effect: "I have a daughter". This for the first time really underlines the pain that Shylock has been caused and shows that rather than being a man incapable of emotion, that he too has suffered greatly and that this is at the root of his determination to have what he is rightfully owed. The change in mood at this point makes Portia's verdict even more shocking and sudden. Ironically Shylock who seemed earlier to know every word of his bond now seems somewhat uncertain for the first time as Portia recites the word of the law to him: "Is that the law?" He then persists in demanding "the bond thrice" and seems suddenly unsettled, edgy and in a hurry to depart. This is conveyed through his short, punctuated speech. Towards the end of the scene in a dramatic and ironic role reversal we see Shylock begging for his livelihood and his life: "Nay, take my life and all, pardon not that. ...read more.

and also when Shylock made the statement "I have a daughter" because this focused on Shylock's suffering for the first time.. In this version Shylock is a more arrogant character. He raises his voice and gets extremely angry and looks shocked and surprised when he asks the question "Is that the law?" At the very end of the scene you feel sorry for Shylock, as he seems old, fragile and weak. He looks as though he has lost everything in the world and he has to hold onto a pillar for support. He falls to the ground and is helped out of the room. The scene ends with just the sound of Shylock crying outside which is very effective as it emphasises his isolation. CONCLUSION Comparison of versions and personal opinions Although all three versions told exactly the same story they all had very different settings and portrayed Shylock in a slightly different way although each one elicited sympathy for him. The Channel 4 version was very colourful and used traditional Shakespearean costumes. Lighting and music were used effectively and the setting gave the impression of a real courtroom. I felt some sympathy for Shylock in this version The Trevor Nunn version was simplistic, with most actors dressed in dark suits. It gave me the impression of rival mafia style gangs. The final version, which was done by the National Theatre Company, was my favourite. Laurence Olivier portrayed Shylock as a strong confident character who moved around the room making him appear more arrogant than in the other two versions but also eliciting sympathy. I felt this version was the best as it succeeded in conveying the complexities of Shylock's character. We saw both arrogance and frailty and I thought it conveyed the story as Shakespeare was trying to put it across in the text. * * * * * 1 ...read more.