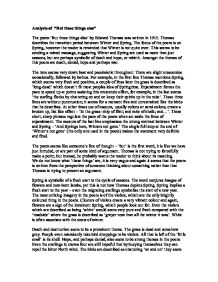 Analysis of 'But These Things Also'

Analysis of "But these things also" The poem 'But these things also' by Edward Thomas was written in 1915. Thomas describes the transition period between Winter and Spring. The focus of the poem is on Spring, however the reader is reminded that Winter is not quite over. This seems to be sending a mixed message, suggesting Winter and Spring are used as more than just seasons, but are perhaps symbolic of death and hope, or rebirth. Amongst the themes of this poem are death, denial, hope and perhaps war. The tone seems very down beat and pessimistic throughout. There are slight crescendos occasionally, followed by bathos. For example, in the first line Thomas mentions Spring, which seems very fresh and positive, a couple of lines later the grass is described as 'long-dead' which doesn't fit most peoples idea of Springtime. Enjambment forces the pace to speed up at points assisting this crescendo effect, for example, in the last stanza 'the starling flocks by chattering on and on keep their spirits up in the mist'. ...read more.

Thomas is not trying to forcefully make a point, but instead, he probably wants the reader to think about its meaning. We do not know what 'these things' are, it is very vague and again it seems that the poem is written from the perspective of someone thinking about something rather than that Thomas is trying to present an argument. Spring is symbolic of a fresh start to the cycle of seasons. The word conjures images of flowers and new-born lambs, yet this is not how Thomas depicts Spring. Spring implies a fresh start to the year - even the migrating starlings symbolise the start of a new year. The most striking imagery in the poem is of the violets, which are the only brightly coloured thing in the poem. Clusters of violets create a very vibrant colour and again, flowers are a sign of the imminent Spring, which people look out for. ...read more.

This suggests that either people are so keen to spot the first signs of Spring that they have become delusional, or that the rest of the landscape is so bleak these few things really stand out and attract attention, like a violet might. Thomas wrote this poem in 1915, during the second year of World War One. Most people assumed the war would be 'over by Christmas' but it carried on for another three years. Thomas could be implying in 'But these things also' that a new spring was arriving yet it should not carry with it hope for the war to end. The great losses during the winter of 1914 - 'Winter's ruin... Winter's debts' cannot be forgotten, hence use of the word 'debts', perhaps insinuating the lives lost. In this way Thomas could be implying that people are living in denial, looking past the signs around them, which confirm winter still lingers. They are fooling themselves that all will soon be over and a fresh beginning will follow. ...read more.