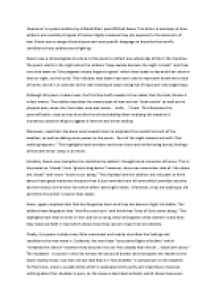 Analysis of &quot;Exposure&quot; by Wilfred Owen

﻿?Exposure? is a poem written by a World War I poet Wilfred Owen. The title is a summary of how soldiers are mentally stripped of human dignity because they are exposed to the elements of war. Owen uses a range of techniques and uses specific language to describe the horrific conditions these soldiers were fighting. Owen uses a chronological structure in this poem to reflect one whole day of life in the trenches. The poem starts in the night when the soldiers ?keep awake because the night is silent? and then runs into dawn as ?the poignant misery begins to grow? which then leads to day and then returns back to night, at the burial. This indicates how dawn has been used to represent death and a lack of home, which is in contrast to the real meaning of dawn being full of hope and new beginnings. ...read more.

Moreover, repetition has been used several times to emphasis the mental torment of the weather, as well as adding more power to the poem. Four of the eight stanzas end with ?But nothing happens.? This highlights how boredom took over them and whilst being bored, feelings of fear and terror creep in on them. Similarly, Owen uses metaphors to describe the soldier?s thoughts and memories of home. This is illustrated as ?slowly? their ?ghosts drag home? however, they soon remember that all ?the doors are closed? and return ?back to our dying.? This displays how the soldiers are reluctant to think about these good memories because then it just reminds them of home which provides security and the misery in the front line which offers nothing for them. ...read more.

Suddenly, the men hear ?successive flights of bullets? which ?streaked the silence? however they describe it to be ?less deadly than the air?black with snow.? The repeated -s sounds in this line echoes the sound of bullets and transports the reader to the harsh reality of war, but then we are told that it?s ?less deathly? in comparison to the weather. Furthermore, snow is usually white which is associated with purity and cleanliness, however, nothing about this situation is pure, so the snow is described as black, which shows how even nature has changed. Wilfred Owen uses a particular structure to explain the daily routine of men fighting as well as using a range of metaphors to help the reader visualise this haunting sight. It seems the men aren?t being killed by the war, but by ?exposure? to the cold. ...read more.