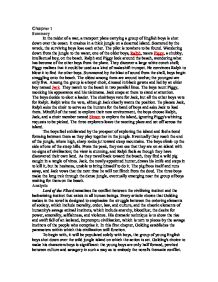 Analysis of Lord of the Flies.

Chapter 1 Summary In the midst of a war, a transport plane carrying a group of English boys is shot down over the ocean. It crashes in a thick jungle on a deserted island. Scattered by the wreck, the surviving boys lose each other. The pilot is nowhere to be found. Wandering down from the jungle to the water, one of the older boys, Ralph, meets Piggy, a chubby, intellectual boy, on the beach. Ralph and Piggy look around the beach, wondering what has become of the other boys from the plane. They discover a large white conch shell; Piggy realizes that it could be used as a kind of makeshift trumpet. He convinces Ralph to blow it to find the other boys. Summoned by the blast of sound from the shell, boys begin straggling onto the beach. The oldest among them are around twelve; the youngest are only five. Among the group is a boys' choir, dressed in black gowns and led by an older boy named Jack. They march to the beach in two parallel lines. The boys taunt Piggy, mocking his appearance and his nickname. Jack snaps at them to stand at attention. The boys decide to elect a leader. The choirboys vote for Jack, but all the other boys vote for Ralph. Ralph wins the vote, although Jack clearly wants the position. To placate Jack, Ralph asks the choir to serve as the hunters for the band of boys and asks Jack to lead them. Mindful of the need to explore their new environment, the boys choose Ralph, Jack, and a choir member named Simon to explore the island, ignoring Piggy's whining requests to be picked. The three explorers leave the meeting place and set off across the island. The boys feel exhilarated by the prospect of exploring the island and feel a bond forming between them as they play together in the jungle. ...read more.

Golding also continues to develop the conflict between Ralph and Jack, now escalated to a real struggle for power, as Jack's brand of violence and savagery almost completely replaces Ralph's disciplined community in the boys' conception of their lives on the island. Ralph's exhilaration in the hunt and his participation in the ritual that nearly kills Robert is, in a sense, a major victory for Jack, since the experience shakes Ralph's confidence in the primacy of his civilized, moral ideals. As befits a power struggle in a savage group, the conflict between the boys manifests itself not as a competition to prove who would be the better leader but as a competition of sheer strength and courage. Just as Ralph went boldly into the dark caves alone to prove his bravery in the previous chapter, Jack goes up the mountain alone now. (It is also significant that Ralph discovers nothing, while Jack discovers what he thinks is the beast: Ralph does not believe in the beast, while it forms a major part of Jack's attitude toward life on the island.) Additionally, Jack gains leverage within the group by using the competition in bravery to force Ralph to commit unwise acts of leadership, such as his decision to go up the mountainside at night. Ralph realizes that it is foolish to hunt the beast at night, but, in a society based on strength, he cannot risk appearing to be a coward. In this way, Jack manages to weaken Ralph's position in the group. Tellingly, Ralph's decision to explore the mountain at night means that he loses the opportunity to prove to everyone that Sam and Eric did not see the beast. Had the boys climbed the mountain in the daylight, they would have seen the dead parachutist for what it was; because they go at night, they see it distorted by shadows and believe that they are seeing the beast. ...read more.