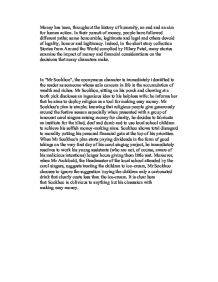 Money has been, throughout the history of humanity, an end and an aim for human action. In their pursuit of money, people have followed different paths; some honourable, legitimate and legal and others devoid of legality, honour and legitimacy. Indeed, in the short story collection Stories from Around the World complied by Hilary Patel, many stories examine the impact of money and financial considerations on the decisions that many characters make. In "Mr Sookhoo", the eponymous character is immediately identified to the reader as someone whose sole concern in life is the accumulation of wealth and riches. Mr Sookhoo, sitting on his porch and chewing at a tooth pick discloses an ingenious idea to his helpless wife: he informs her that he aims to deploy religion as a tool for making easy money. Mr Sookhoo's plan is simple; knowing that religious people give generously around the festive season especially when presented with a group of innocent carol singers raising money for charity, he decides to fabricate an institute for the blind, deaf and dumb and to use local school children to achieve his selfish money-making aims. ...read more.

First, Mr Ali, who had previously paid Sookhoo to deliver some gravel for him, appears and exposes Sookhoo's failure to keep his end of the bargain. In addition, Mr Archibald, who started harbouring doubts about Mr Sookhoo when the latter's account of the carol singing successes did not correspond to what Mr Archibald was told by a young pupil called Horace, receives a visitor by the name of Mr Harris (who is a real philanthropist working in the charity field) who confirms to him that the deaf, dumb and blind institute does not exist. These revelations and findings raise tension in the story and drive the plotline towards its climax when Mr Sookhoo's love of money brings about his downfall and arrest. At the end of the story, poetic justice is upheld as the aggressor and wrong doer is punished while the good are rewarded. "Mr Sookhoo" ends on the note that a blind love of money can only lead to negative consequences. ...read more.

On the other hand, the Exorcist makes his living by giving the false impression that he is curing people from obsessions by demons and other supernatural evil beings. When the Exorcist is called upon to help with the assumed "evil spirit" wreaking havoc in the shop store, his world that places money at the top of the consideration list and the world of the Shopman, where money occupies the same place, meet. The Exorcist being adept at reading people like a book, manages to speculate accurately about the Shopman and the way he came to accumulate his wealth. It transpires that the Shopman killed a man and his widow before taking their land and money. However, unlike Mr Sookhoo, the Shopman remains free at the end with the cat, a symbol of his dark secret, roaming in the streets with a jug on its head. The symbolism of the cat slipping out of the store but with its head still caught inside the jug suggests that the Shopman's secret is only half revealed. ...read more.