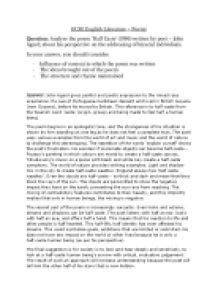 Transfer-Encoding: chunked ﻿GCSE English Literature ? Poetry Question: Analyse the poem ?Half Caste? (1996) written by poet ? John Agard, about his perspective on the addressing of biracial individuals. In your answer, you should consider: * Influence of context in which the poem was written * The ideas brought out of the poem * The structure and rhyme maintained Answer: John Agard gives painful and poetic expression to the mixed race experience. He was of Portuguese-Caribbean descent and lived in British Guyana (now Guyana), before he moved to Britain. The reference is to half-caste from the Spanish word ?casta? (origin, group) and being made to feel half a human being. The poem begins in an apologetic tone, and the strangeness of his situation is shown by him standing on one leg as he does not feel a complete man. The poet uses various examples from the world of art and music and the world of nature to challenge this stereotyping. ...read more.

This means that his reaction to life and other people is half hearted. This half-life, half identity has even affected his dreams. This could symbolise goals, ambitions that are limited or restricted. He does not have any impact on the world or other lives because he is only a half-caste human being (as per his perspective). The final suggestion is for society is to look and hear deeply and sensitively, to look at a half-caste human being?s sorrow with critical, evaluative judgement. The result of such an approach will increase understanding because the poet will tell him the other half of his story that is now hidden. The poem is built of short lines of uneven length. The first three lines introduces the subject in an apologetic tone ? ?Excuse me? and concludes with a small stanza of three lines promising to communicate. The middle of the poem is dominated by enjambment because the poet?s pain overflows in one unbroken recital. ...read more.

Various symbols are used in the poem ? keen half of mih ear, keen half of mih eye implies a desire to ignore the stereotyping and yet keenly be conscious of it. The ?half-caste? offers only half a hand to show how deep the resentment is. Turning people into half-caste is one of the greatest of social predicaments the world faces. The need is for equality, dignity and respect to be given to each human being, bringing the marginalised to the centre. The poem ?Half-Caste? depicts the anger, pain and fluctuation of emotion felt by Agard, when (rude) comments were addressed to him, directed at his mix of nationality. It also validates that addressing a person as ?half-caste? is cretinous and in the conclusion, the lines ?But yu must come back tomorrow, wid de whole of yu eye, wid de whole of yu ear, wid de whole of yu mind, and I will tell yu de other half of my story? shows he is willing to make amends with the commentators, if they only cease to treat him as half a human being. ...read more.