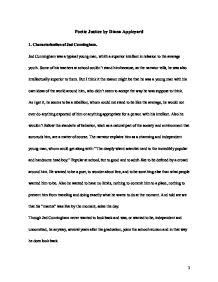 Poetic Justice by Diana Appleyard 1. Characterisation of Jed Cunningham. Jed Cunningham was a typical young man, whith a superior intellect in relasion to the avarage youth. Some of his teachers at school couldn't stand him because, as the narrator tells, he was also intellectually superior to them. But I think it the reason might be that he was a young man with his own ideas of the world around him, who didn't seem to accept the way he was suppose to think. As i get it, he seems to ba a rebellion, whom could not stand to be like the average, he would not ever do anything expected of him or anything appropriate for a person with his intellect. Also he wouldn't follow the standarts of behavior, wich as a natural part of the society and environment that soronuds him, are a matter of course. The narrator explains him as a charming and independent young man, whom could get along with: "The deeply wierd scientist nerd to the incredibly popular and handsome head boy." Popular at school, but to good and to adult-like to be defined by a crowd around him. He wanted to be a poet, to wonder about live, and to be somthing else than what people wanted him to be. ...read more.

Before she was going to pick up her youngest daughter from school, and definatly quit the part with the lines. The narrator tells us how she uses a lot of lotions to stop wrinkels, trying on her daughters close, and how she is working out like an insane, in a hopeless escape from the ageing process. It seems as all she really wants to, is to be back in school with all the dreams and expectations of life and being a poet. She appears as very unconfident personality, for whom life never really turned out as she had dreamed it to. Also it seems to me that it is like a burden to her that she never had the bravery to be what she wanted to be, instead of what her circle of acquaintances wanted her to. That might also be the reason why she was, and still is, so in love with Jed. He was the only one she could ever talk to about not following the expectations. For instance she tells about their "secret" dream, moving to Ireland and live by the day. As she writes about Jed. "... he was the first, ever, who met her interlectually..." He was the first person she had met, who she could share her inner thoughts and dreams with. ...read more.

How the dreams of the future dominated the mind and they still had the chance to choose what to be and how to act. The story describes how the fear of acting in the wrong way, makes someone hold on to the secure choise and possibly it keeps them back. While on the other hand, the fear of being like everyone else, or not to follow ones dreams makes you throw every kind of security away, and rush into a life you might get lost in. 6. The title The narrator realizes at last that she was right in not going away and instead stay safe with her family, cause that was the right thing to do for her. She is not a poet ".. and only a poet could be happy with a life of sin." She can't leave her children she won't, it would be a sin she could not live with. At last she figures out that she has to transfer her passion of the unknown to her children, now they are the youth with all life ahead of them. They are the ones to use it now. She can't live with the sin of a poet, but she won't either suppress it inside of her, that is why she passes it on to her children. And like that, she has been fair, and justifyed the poetic part she got inside. Anne-Martha Ravn 1.y 1 ...read more.