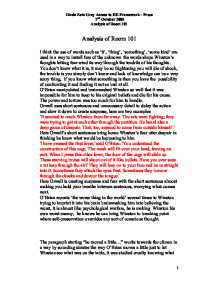 Analysis of Room 101 I think the use of words such as `it', `thing', `something', `some kind' are used in a way to install fear of the unknown the words shape Winston's thoughts letting fear wind its way through the tendrils of his thoughts. You don't know what it is, it may be so frightening you will die of shock, the trouble is you simply don't know and lack of knowledge can be a very scary thing, if you know what something is then you have the possibility of confronting it and finding it not so bad at all. O'Brian manipulated and brainwashed Winston so well that it was impossible for him to keep to his original beliefs and die for his cause. The power and torture was too much for him to handle. Orwell uses short sentences and unnecessary detail to delay the action and slow it down to create suspense, here are two examples `It seemed to reach Winston from far away. The rats were fighting; they were trying to get at each other through the partition. He heard also a deep groan of despair. That, too, seemed to come from outside himself.' Here Orwell's short sentences bring home Winston's fear utter despair in thinking he knew what would be happening to him 'I have pressed the first lever,' said O'Brien. ...read more.

showing a different face to the party members and Thought Police, we all use a mask to hide our real thoughts as people don't like laying themselves open to other people's cruelties and ridicule. Another simile used "His bowels seemed to turn to water" was effective in a way that it showed Winston's depth of despair and utter fright and panic when he realised exactly what the meaning of the mask like attachment was. It meant the rats would eat their way through his face. Winston is a minor member of the ruling Party in a futuristic London, Winston is a thin, frail, contemplative, intellectual, and fatalistic thirty-nine-year-old. Winston hates the totalitarian control and enforced repression that are characteristic of his government. He harbours revolutionary dreams.(spark notes- 1984) In the excerpt that we read Winston comes across as a near broken man and by the time O'Brian finishes with him he is totally broken. I do not think Winston was a coward for trying to get the punishment put on Julia it was self preservation, I think we all would do the same if faced with our greatest fear, as mankind is only human we are not unthinking machines nor are we unfeeling. Winston's main attributes are his rebelliousness and his fatalism. O'Brian divest's Winston of his rebelliousness and his manhood even when he finally realised what O'Brian wanted of him, Winston screams "Do it to Julia!" ...read more.

This heightens the tension when O'Brian reveals the worst thing in the world for Winston involves rats. He uses words such as `deep down', `buried alive', `death by fire', `premonitory fear', `high cracked voice' which all paint an image of fear, death, burial which sets a mood for the reader, we can feel where Winston is in his mind right then. The climax is when "The mask was closing on his face" Winston was mindless in his absolute fear and despair, then a tiny fragment of hope glimmered into his mind, he was frantic to push the punishment anywhere but onto himself, he finally realised the only thing was his denouncement of Julia, to pass the punishment on to herself, forgotten was the love the passion they had shared, self preservation finally kicked in, every man for himself in the end, as well we all know very few people would be willing to suffer endless torture and die for us, we do what it necessary to survive which is what Winston finally does. The Party had won in the end, he was a broken man. The point of view expressed in this story is a third person point of view the narrator is not part of the story but in the minds of the characters like the all seeing eye or an omniscient presence overlooking the proceedings. ...read more.