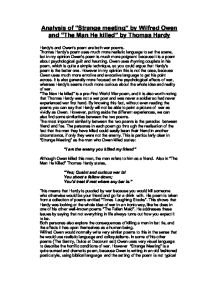 Analysis of &quot;Strange meeting&quot; by Wilfred Owen and &quot;The Man He killed&quot; by Thomas Hardy

Analysis of "Strange meeting" by Wilfred Owen and "The Man He killed" by Thomas Hardy Hardy's and Owen's poem are both war poems. Thomas Hardy's poem uses much more realistic language to set the scene, but in my opinion Owen's poem is much more poignant because it is a poem about psychological guilt and haunting. Owen uses rhyming couplets in his poem, which is quite a simple technique, so you could argue that Hardy's poem is the better one. However in my opinion this is not the case, because Owen uses much more emotive and evocative language to get his point across. It is also generally more focused on the psychological effects of war, whereas Hardy's seems much more curious about the whole idea and reality of war. "The Man He killed" is a pre-First World War poem, and it is also worth noting that Thomas Hardy was not a war poet and was never a soldier so had never experienced war first hand. By knowing this fact, without even reading the poems you can say that Hardy will not be able to paint a picture of war as vividly as Owen. ...read more.

The dead man is implying that he also had the same view upon war as Owen. Because Owen is making the man he killed so alike to himself, I think he is trying to convey that because he has experienced war and killing, he has consequently killed a part of himself. More evidence to back up the theory that the man Owen killed is part of himself can be found in the 25th line where the man says: "The pity of war, the pity war distilled" This was a phrase that Owen himself once used, and the fact that the dead man in this poem uses it cannot be simply coincidence. The quote above agrees with a statement in a preface that Owen wrote: "My subject is War and the pity of War. The Poetry is in the pity." However if you look at the character in Owen's poem from a different perspective, you can say that if he has killed someone who could have been a friend, this illustrates and emphasises the pointlessness of war. The line after the one shown above is also quite significant. ...read more.

However, Thomas Hardy does try to justify to himself why he killed another man, he seems as if he is trying to make an excuse: "Because, because he was my foe; just so" In this line, Hardy is trying to justify his killing of a man, a man that he has stated earlier in the poem that he would go for a drink with. Owen seems very anti-war, whereas Hardy seems relatively neutral on the case of war. The way Hardy writes the poem with natural sounding rhymes and an informal style means that it sounds much more like a conversation between Hardy and the reader. I much prefer Wilfred Owen's poem. This is because it has a darker feel to it because of the setting, also because of the language that Owen uses. His poem has lots of hidden meanings that makes the reader think more, whereas Hardy's poem is less thought provoking and memorable, which is why I think Owen's is the better poem, as a poem should not just be read, then put down, it should force the reader to think about its meaning and what ideas it is trying to convey. ...read more.