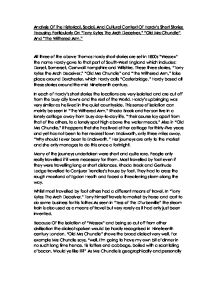 All three of the above Thomas Hardy short stories are set in 1800s “Wessex” the name Hardy gave to that part of South-West England which includes: Dorset, Somerset, Cornwall Hampshire and Wiltshire. These three stories, “Tony Kytes the Arch Deceiver,” “Old Mrs Chundle” and “The Withered Arm,” take place around Dorchester, which Hardy calls “Casterbridge.” Hardy based all these stories around the mid Nineteenth century.

In each of Hardy’s short stories the locations are very isolated and are cut off from the busy city towns and the rest of the World. Hardy’s upbringing was very similar as he lived in the quiet countryside. This sense of isolation can mainly be seen in “The Withered Arm.” Rhoda Brook and her son live in a lonely cottage away from busy day-to-day life. “Their course lay apart from that of the others, to a lonely spot high above the water meads.” Also in “Old Mrs Chundle,” it happens that she has lived at her cottage for thirty-five years and yet has not been to her nearest town Enckworth, only three miles away. “Why should I ever been to Enckworth.” Her journeys are only to the market and she only manages to do this once a fortnight!

Many of the journeys undertaken were short and quite rare. People only really travelled if it were necessary for them. Most travelled by foot even if they were travelling long or short distances. Rhoda Brook and Gertrude Lodge travelled to Conjurer Trendles’s house by foot. They had to cross the rough moorland of Egdon Heath and faced a threatening storm along the way.

Whilst most travelled by foot others had a different means of travel. In “Tony Kytes The Arch Deceiver.” Tony himself travels to market by horse and cart to do some business for his father.As seen in “Tess of The D’urberville” the steam train is also used as a means of travel but very rarely as it had only just been invented.

Because Of the isolation of “Wessex” and being so cut off from other civilisation the dialect spoken would be hardly recognised in Nineteenth century London. “Old Mrs Chundle” shows the broad dialect very well. For example Mrs Chundle says, “well, I’m going to have my own bit o’dinner in no such long time hence. Tis tatters and cabbage, boiled with a scantaling o’bacon. Would ye like it?” As Mrs Chundle is geographically and personally isolated her accent is very broad, but when the Curate speaks, who has come from a different part of England the difference in dialect is very noticeable. “No, I’ll join you. Call me when it’s ready.” Of course his education and social class would also influence the way he speaks.

Social class is explored within Hardy’s stories and is clearly shown in “The Withered Arm.” Rhoda Brook is certainly in a lower class not only is she a single mother and therefore looked down upon, but also she lives in an awful run down cottage, “it was built of mud-walls, the surface of which had been washed by many rains into channels and depressions that left none of the original flat face visible; while here and there in the thatch above a rafter showed like a bone protruding through the skin.” Gertrude Lodge is clearly of a much higher class, this is shown when Rhoda’s son says “yes and more. A lady complete.” Farmer Lodge treats his young wife well until she suffers the disability of a withered and it is at this point that he barely even speaks to her. This shows that the farmer is a shallow character and only married Gertrude for her looks. He refuses to acknowledge his own son from Rhoda. This could be because if it became public that he had an illegitimate child it would severely damage his reputation in the community.

In “Old Mrs Chundle” the divide in social class can be explored even more. The Curate is of a much higher class than Mrs Chundle. This is clear when Mrs Chundle says, “Oh, faith, I don’t want to eat with my betters – not I.” This quotation shows that Mrs Chundle believes in the status of social class. Also when Mrs Chundle is asked why she has not been to her nearest town Enckworth she replies, “I never had any business there – a great mansion of a place, holding people that I’ve no more doings with than the people of the moon.” This quotation confirms that Mrs Chundle does not want to be associated with the higher class as she believes she does not belong there.

There is a strong emphasis on crime and punishment in the “Withered Arm,” as there is in “Tess of the D’urberville.” Even small crimes like stealing could result in death. Hardy was familiar with capital punishment and would have watched public executions as a youngster, this is reflected in “Tess of the D’urberville” when Tess is hung for murdering Alec who had raped her. Also, in the “Withered Arm” Rhoda’s son is hung for being present by chance when a rick was set alight. “If ever a young fellow deserved to be let off, this one does; only just turned eighteen, and only present by chance when the rick was fired.” This again relates to Hardy’s childhood as his father told him a story where a man was hung for being present when a haystack was set alight. This shows how unfair and un-just the legal system was.

Magic and superstition plays a central part in “The Withered Arm.” Every village in Wessex was supposed to have its own witch who specialised in curses. Her services were often sought for casting the “evil eye” at an enemy. This was known as “overlooking.” Because of a dream Rhoda, who was jealous of Gertrude, had she believes she has put a curse on Gertrude “She uncovered her left hand and arm, and their outline confronted Rhoda’s gaze as the exact original of the limb she had beheld and seized in her dream. Rhoda’s eyes became riveted on the discoloration; she fancied that she discerned in them the shape of her four fingers.” When looking for a cure for her withered arm Gertrude went to conjuror Trendle who told her she must lay her arm across the fresh dead corpse of a man. Throughout all this Farmer Lodge is very unsupportive of Gertrude as he does not believe in superstition. As well as magic and superstition fate and fortune play a part in these stories.

Many people at that time believed in fate and fortune. In “Tony Kytes the Arch Deceiver,” it would seem it was fate that caused Unity and Hannah to refuse to marry him and leave him with Milly. “Well Milly, he says at last, going up to her, it does seem as if fate has ordained that it should be you and I, or nobody.” However this could just be seen as coincidence that he marries Milly because if any of the other girls had said yes first he would have been prepared to marry them.

The death of “Old Mrs Chundle” after she had been to church is seen as fate, because she had told the curate she was a regular church goer when she was not and when she did try to go to church she died. “She was eager to hear you again later on. However, twas ordained otherwise for the poor soul, and she was soon gone.” But also it could be the way life works, Mrs Chundle was an elderly lady and rushing around and running up a hill at her age could have killed her. The belief in fate and fortune was so strong in the nineteenth century because people used it as a way of making sense of life and people believed what was meant to be was meant to be.

In conclusion I like the way superstition is used in a major way in “The Withered Arm,” the way the differences in the social classes are shown in all the stories. In my favourite story “Tony Kytes the Arch Deceiver” I particularly like the way he uses his charm on all three women to his own advantage. All these stories gave me an insight into what life was like in the Nineteenth century and emphasise the difference in the way we live today.