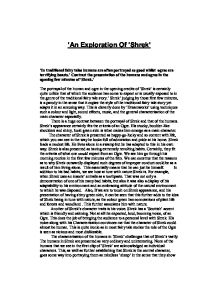 Analysis of the opening of the Shrek movie

'An Exploration Of 'Shrek' 'In traditional fairy tales humans are often portrayed as good whilst ogres are terrifying beasts.' Contrast the presentation of the humans and ogres in the opening few minutes of 'Shrek.' The portrayal of the human and ogre in the opening credits of 'Shrek' is certainly quite unlike that of which the audience has come to expect or is usually exposed to in the genre of the traditional fairy tale story.' Shrek' judging by those first few minutes, is a parody in the sense that it copies the style of the traditional fairy tale story yet adapts it in an amusing way. This is cleverly done by 'Dreamworks' using techniques such a colour and light, sound effects, music, and the general characterisation of the main character especially. There is a huge contrast between the portrayal of Shrek and that of the humans. Shrek's appearance certainly fits the criteria of an Ogre. His stocky, boulder-like shoulders and shiny, lucid green skin is what makes him emerge as a main character. The character of Shrek is presented as happy-go-lucky and so content with life, which you can see in the way he looks full of admiration and pride at his home. Shrek leads a modest life. He lives alone in a swamp but he has adapted to this in his own way. Shrek is also presented as having extremely revolting habits. Certainly, they fit the criteria of what one would expect from an Ogre. ...read more.

As a result, we come to share in his views on the beauty of his home, despite it being a grimy swamp in reality. The use of light, to present the humans has a different effect. We are introduced to the humans from the setting of the sun. In the first scenes in which they are present, the sun is setting and the backdrop of the village is a blood red-orangey hue. Immediately what springs to mind is negative imagery. The colour red is generally associated with danger. The colour of the sky, as a result, influences our view of the humans which consequently means that they are hampered with the same negative links. Furthermore, the fact that we only see the humans in the night is potent, as it means that they associated with all the strong negative connotations of the dark and the night time. The night time is typically the time frame in which bad or evil things occur. It is also important to note, that we can't see the faces of the humans, but only they distorted shadows. This further established their insignificant to Shrek as the main character, but it also ties them in with the negative connotations of the night time. The idea that is presented to us is that they are up to no good. The fact that we can't see their faces, also means that we can't trust them and neither can we connect with them as the audience. ...read more.

It is from this is that we get the idea that the story of 'Shrek' is paradoxical judging on the opening scenes that we were shown. If we further analyse the first few scenes, it is clear that people have come to expect the traditional and stereotypical view. The film, 'Shrek', challenges those self-same traditional ideas of good and bad which have their basis in stories and ballads from over the centuries. As a result, the film can be seen as a strong statement. The film hints at ideas of racism or perhaps a fear of what is unfamiliar this is presented through the behaviour of the humans towards Shrek. The humans react to Shrek with great dislike, and just assume, without real evidence, that he is a terrible creature; as ugly on the inside as he is on the outside. What is ironic is that their behaviour towards Shrek is in their view, noble and brave; and this is the demeanour that conforms to traditional fairy tale story. In the film, the fact that Shrek is the one who displays a good natured and decent temperament, despite being flawed holds significant meaning. It shows that narrow-mindedness is a wasted mentality that holds no accuracy. Overall, what we can conclude from the film is that the portrayal of the humans and the beast differ vastly from the traditional presentation of humans and beasts in the genre of the traditional fairy tale story. The film breaks away from those traditional ideas, and in a way, the roles between humans and beasts reverse and instead the humans are presented as wicked and the ogre is presented as decent and good. ...read more.

There are lots of apt points made in this essay but the reason it cannot gain top marks is because it is not a concise response. Points are repeated or drawn out which means the flow of the response is lost.