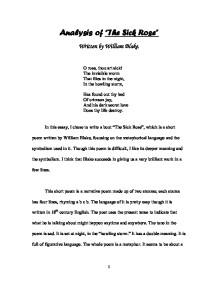 Analysis of "The Sick Rose" Written by William Blake. O rose, thou art sick! The invisible worm That flies in the night, In the howling storm, Has found out thy bed Of crimson joy, And his dark secret love Does thy life destroy. In this essay, I chose to write a bout "The Sick Rose", which is a short poem written by William Blake, focusing on the metaphorical language and the symbolism used in it. Though this poem is difficult, I like its deeper meaning and the symbolism. I think that Blake succeeds in giving us a very brilliant work in a few lines. This short poem is a narrative poem made up of two stanzas; each stanza has four lines, rhyming a b c b. ...read more.

A rose, in most cultures including my own, regularly represents love, loyalty and beauty, and is usually a woman. This rose has been destroyed by an "invisible worm" which is addressed as masculine by using the pronoun 'his' in the seventh line instead of 'its'. The poet portrays the worm negatively. The worm represents the rapist who has destroyed the rose. A worm is a symbol of the male sexual organ. It is also a symbol of something destructive. The word "invisible" may indicate that nobody can find out his crime. Also, the word "night" in the third line supports this idea; night is a symbol of things secret and hidden. The poet wants to say that everything is done in darkness. ...read more.

I think that the girl and the rapist were in love; she may refuse to make love with him so he raped her. The last line "Does thy life destroy" is something about death. The whole crime has destroyed the girl's happiness, vitality and life. In short, the poem depends on symbolism to tell us a story of a girl who has passed through a terrifying experience. I like this poem because it is full of meaning despite the fact that it is too short. Though I face some difficulties understanding the symbols, I like how Blake symbolizes the crime properly. The symbols in this poem allow the reader to imagine the event that take place in it more widely, because of that the story of the poem is so admirable. ?? ?? ?? ?? 1 ...read more.

The strongest part of this essay is the middle section when analysis of the poem is the focus. It is important to focus on the interpretations and meanings of the language and this focus is a bit vague at the beginning of the essay. Points made are interesting and varied but sometimes get lost in the way they are expressed and require further support directly from the poem.