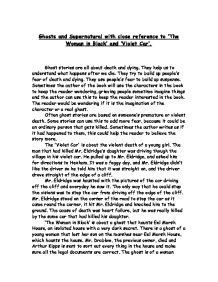 Ghosts and Supernatural with close reference to 'The Woman in Black' and 'Violet Car'. Ghost stories are all about death and dying. They help us to understand what happens after we die. They try to build up people's fear of death and dying. They use people's fear to build up suspense. Sometimes the author of the book will use the characters in the book to keep the reader wondering, grieving people sometime imagine things and the author can use this to keep the reader interested in the book. The reader would be wondering if it is the imagination of the character or a real ghost. Often ghost stories are based on someone's premature or violent death. Some stories can use this to add more fear, because it could be an ordinary person that gets killed. Sometimes the author writes as if it had happened to them, this could help the reader to believe the story more. The 'Violet Car' is about the violent death of a young girl. ...read more.

Mr. Drablow, the previous owner, died and Arthur Kipps is sent to sort out every thing in the house and make sure all the legal documents are correct. The ghost is of a woman called Jennet Humfrye, who had a son but was not allowed to keep him so she gave him up to Alice Drablow. Jennet came to see here son all the time and one day the child had been out in the town and come back on a horse and cart, but it had gone off the tracks and into the marsh. Arthur hears noises on the marsh of people dying, drowning in the mud of the marshes. Every time the ghost is seen a baby dies, but when no child died they thought that the curse of the old house had ended, but Arthur's child and wife die in an accident and the woman in black was left to haunt Crythin Gifford. The books are similar in many aspects, they are both written in the first person. ...read more.

Bump. Bump. Bump" This kind of sentence helps to build up anticipation and anxiety. It is like you want to find out what is going to happen next but are too scared to find out. She does not use cliffhangers at the end of a chapter; however she does use them at the end of some paragraphs. The 'Violet Car' is a very different book in that respect, Edith Nesbit writes in a different way to Susan Hill. E. Nesbit didn't write in short sentences; instead she told the story in a way that made you want to continue reading. Both the stories are traditional well told ghost stories that use different techniques to get the same result. They are both interesting and exciting and the kind of story that you don't want to put down because it is so full of suspense. I think that 'The Woman in Black' is a better ghost story because a lot more happens in it and it has a more complex plot to the 'Violet Car', however 'The Woman in Black' is a book whereas the 'Violet Car' is a short story. 'The Woman in Black' was described has 'Heartstoppingly chilling' and I agree with this. ...read more.