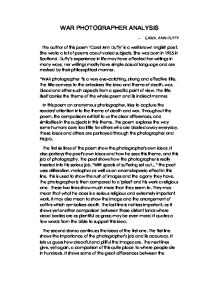 WAR PHOTOGRAPHER ANALYSIS - CAROL ANN DUFFY The author of this poem 'Carol Ann Duffy' is a well known English poet. She wrote a lot of poems about varied subjects. She was born in 1955 in Scotland. Duffy's experience in life may have affected her writings in many ways. Her writings mostly have simple casual language and are marked by their philosophical manner. "WAR photographer "is a very eye-catching, strong and effective title. The title conveys to the onlookers the idea and theme of death, war, blood and other such aspects from a specific point of view. The title itself carries the theme of the whole poem and its indirect manner. ...read more.

This is used to show the rush of images and the agony they have. The photographer is then compared to a 'priest' and his work a religious one. These two lines show much more than they seem to. They may mean that what he does is a serious religious and extremely important work. It may also mean to show the image and the arrangement of coffins which symbolizes death. The last line is not less important, as it shows yet another comparison between these distant lands where dead bodies are as plentiful as grass; may be even more! It quotes a few words from the bible to support this idea. ...read more.

How human blood is so cheap and how countries and languages, shouldn't really distinguish between humans. The last stanza takes an over view over the whole affair. It shows how there are many more painful images which we are not shown. It explores how millions of people die for nearly nothing. It shows again, and compares how the comfortable citizens won't really give much care to such things. It says that they will have pity but only for short. Only as people listen to religious sermons, think for only a few minutes, and then forget all about it. The last two lines show another point-of-view of the photographer. He 'stares impassively' at a place where he should be. This place is where he lives, and does this sacred job, but yet where people 'do not care'. By : Abdurrhman Ahmed Al-Shimi ...read more.