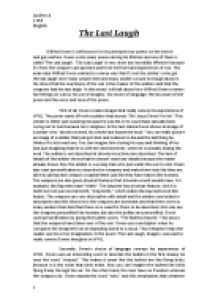 ﻿Andrew.S 11KS English The Last Laugh Wilfred Owen is well known for his portrayed war poetry on the trench and gas warfare. Owen wrote many poems during his lifetime and one of them is called ?The Last Laugh?. ?The Last Laugh? is very short but incredibly effective because it?s from the weapon?s perspective and from his first hand experiences of war. The main idea Wilfred Owen wanted to convey was that it?s not the soldier?s who get the last laugh since many people died and many soldiers would not laugh about it. He shows that the machinery of the war is the master of the soldiers and that the weapons had the last laugh. In this essay I will talk about how Wilfred Owen conveys his feelings on war by his use of imagery, his choice of language, the structure of the poem and the voice and tone of the poem. First of all, Owen creates images that really convey his experiences of WW1. The poem starts off with a solider that shouts ?Oh! Jesus Christ! I?m hit.? This solider is either just swearing because he was hit or he could have actually been crying out to God because he is religious. In the last stanza Owen shows an image of a solider who ?slowly lowered, his whole face kissed the mud.? You can really picture an image ...read more.

This description of a dying soldier smiling before he dies confuses the reader and makes the reader think why is the soldier smiling. There were many young soldiers fighting for their country and Owen tells us by using the word ?childlike.? Also, the soldier in the second stanza was crying out for his mother and father, tells us the soldier is young and all he wants his mother and father like a normal young kid would want and have when young. In most of his poems, he always refers to how young some of the soldiers were because he probably thought it was crazy how young the some of the soldiers were. The young soldiers didn't have a normal childhood like kids do today. A word that makes it look like the Shrapnel-cloud is a human is the description that it ?leisurely gestured.? It suggests that the Shrapnel-cloud has arms because he is gesturing in a very relaxed way, just like a human would. The word ?leisurely? stands out because you think why would a cloud gesture something in an unhurried manor. The weapons were not only personified as humans but also as animals; we see this in the last sentence of the last stanza with ?The Gas hissed,? where the onomatopoeic ?hissed?, makes the gas sound like a snake. ...read more.

Owen uses irony in the poem because the title ?The last laugh? can be thought of as the last ones alive. The weapons were all in one piece and were unharmed, whereas the soldiers died. It?s also ironic because he says that the weapons had the last laugh however the weapons can?t even laugh. Owen expresses his feelings of WW1 by the tone and voice used in the poem. In conclusion, I think that Owens poem ?The Last Laugh? is a great poem and he was very successful at expressing how he feels about World War 1. The poem was effective in conveying Owens feelings because of all the techniques used in the poem. I would never think about the weapons having the last laugh, it would be the last thing I would think of. It was a very smart poem, how he personified the weapons to make them like humans. Every single thing was well thought of and I love how the humans have two lines and the weapons have three lines and how they respond to the humans. The last line also made me really think of gas and how it caused many harsh and painful deaths that I cannot even imagine. Overall, the poem was a great poem because it really conveyed Wilfred Owens experiences of WW1 by his use of imagery, choice of language, the structure of the poem and the voice and tone of the poem. ...read more.