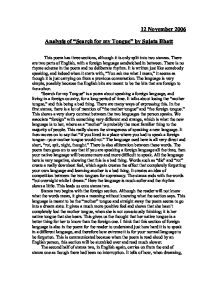 Anaylis of Search for my Tongue

12 November 2006 Analysis of "Search for my Tongue" by Sujata Bhatt This poem has three sections, although it is only split into two stanzas. There are two parts of English, with a foreign language sandwiched in between. There is no rhyme scheme in the poem and no deliberate rhythm. It is written just like somebody speaking, and indeed when it starts with, "You ask me what I mean," it seems as though it is just carrying on from a previous conversation. The language is very simple, possibly because the English bits are meant to be the bits that are foreign to the author. "Search for my Tongue" is a poem about speaking a foreign language, and living in a foreign country, for a long period of time. It talks about losing the "mother tongue," and this being a bad thing. There are many ways of expressing this. In the first stanza, there is a lot of mention of "the mother tongue" and "the foreign tongue." This shows a very sharp contrast between the two languages the person speaks. ...read more.

This leads us onto stanza two. Stanza two begins with the foreign section. Although the reader will not know what the words mean, it gives a meaning without knowing what the section says. This language is meant to be the "mother" tongue and straight away the poem seems to go into a dream state. It gives a much more positive feel and shows that she hasn't completely lost the mother tongue, when she is not consciously thinking; it is her native tongue that she hears. This gives us the thought that her native tongue is a better thing for her to know than the foreign one. I think that this section of foreign language is also in the poem for the reader to understand just how hard it is to speak in a different language, and therefore how extreme it is for your normal language to be forgotten. This is communicated because when the poem is read aloud by an English person, this section will be stumbled over and read much slower. The second half of stanza two, in English again, carries on from the end of stanza one as though there had been no interruption. ...read more.

It also says that every time "I think I have lost the mother tongue, it blossoms out of my mouth." This also shows that it is very strong because it refuses to be forgotten, and continually reminds you of your own language and country. There is a lot of imagery from nature and spring, which gives the idea of a new beginning or a rebirth for the inborn tongue. It also shows that the native tongue is the best one, because it is compared to a blossoming plant and the language is very positive, where as at the end of stanza one, where it was being forgotten, the language was very negative, and the comparison to nature was more to a weed than a beautiful growing flower in spring or summer. I think that the message this poem is trying to communicate is that no matter how well learnt a language is, you will always be from another country, who speaks a different language naturally and that no matter how long you spend in the other country you will never be allowed to forget that you were not born there. You will always be reminded of your "mother tongue" and indeed part of you never wants to forget it. By Rebecca Britton ...read more.