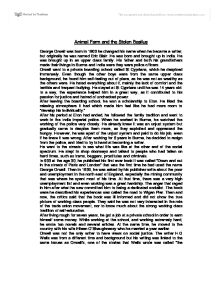 Animal Farm and the Stolen Basilus

Animal Farm and the Stolen Basilus George Orwell was born in 1903 he changed his name when he became a writer, but originally he was named Eric Blair. He was born and brought up in India. He was brought up in an upper class family. His father and both his grandfathers made their livings in Burma and India were they were police officers. Orwell went to a private boarding school called St Cyprians, which he despised immensely. Even though the other boys were from the same upper class background, he found him self-feeling out of place, as he was not as wealthy as the others were. He hated everything about it, mainly the lack of comfort and the terrible and frequent bullying. He stayed at St Cyprians until he was 14 years old. In a way, the experience helped him in a great way, as it contributed to his passion for justice and hatred of unchecked power. After leaving the boarding school, he won a scholarship to Eton. He liked the relaxing atmosphere it had which made him feel like he had more room to "develop his individuality." After his period at Eton had ended, he followed the family tradition and went to work in the India imperial police. ...read more.

Allegories add more depth, character and interest to a piece of writing. Irony is when one or more characters in a story don't know what's going on but the audience does i.e. "Comrades" he said quietly "do you know who is responsible for this? Do you know the enemy who has come in the night and overthrown our windmill? SNOWBALL!" he suddenly roared in a voice of thunder. "Snowball has done this thing! In sheer malignity, thinking it will set back our plans and avenge him self for ignominious expulsion, this traitor has crept here under the cover of the night and destroyed our work of nearly a year. Comrades, here and now I pronounce the death sentence upon snowball. "Animal hero, second class", and half a bushel of apples to anyone who brings him to justice. A full bushel to anyone who catches him alive." Of course, we know that it was not snowball that destroyed the windmill but the gale. Napoleon has brain washed the animals into thinking that snowball is an evil enemy, really we know that this has nothing to do with Snowball, but Napoleon is trying to become the good "guy" and make snowball seam like the one who has been the bad "guy" from the start. ...read more.

He ruled the USSR through fear and political cunning. Trotsky was turned into a pig named snowball, Trotsky was a key thinker and leader in the revolution. He was assassinated; this was almost certainly under the orders of Stalin. Marx had the idea that there was no need in kings or leaders but that the country and the people in it would be equal. Marx died before he had the chance to tell many people but he wrote it down, he was not the greatest person at making things clear of what he was trying to say which is where Lenin came in. Lenin explained the idea to the country in a way that everyone could understand it. When Lenin died Trotsky and Stalin became the inspirational figures to make the idea come true. The king and many other leaders that held a strong hand in the running of Russia were overthrown; Stalin began to over rule Trotsky and eventually had him assassinated. At the start of the revolution, it was said that there were to be no kings or rulers, but after Stalin became soul proclaimed it was as the issue had never been raised and Stalin was the leader. Both Animal Farm and The Stolen Basillus are incredible stories. They are both simple to understand even with the allegories in them. Even though it is supposed to make the stories more interesting, it does not make them more complicated. ...read more.