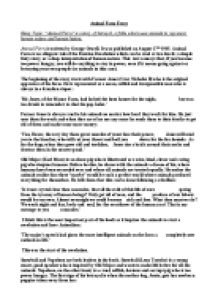 Animal Farm is a story of betrayal; a fable which uses animals to represent human nature and human history

﻿Animal Farm Essay Essay Topic: ?Animal Farm? is a story of betrayal; a fable which uses animals to represent human nature and human history Animal Farm is written by George Orwell. It was published on August 17th 1945. Animal Farm is an allegoric tale of the Russian Revolution which can be read at two levels; a simple fairy story, or a deep interpretation of human nature. This text conveys that, if you become too power hungry, you will do anything to stay in power, even if it means going against or betraying your own people (or animals in this case). The beginning of the story starts with Farmer Jones (Czar Nicholas ll) who is the original oppressor of the farm. He is represented as a mean, selfish and irresponsible man who is always in a drunken stupor: 'Mr Jones, of the Manor Farm, had locked the hens houses for the night, but was too drunk to remember to shut the pop-holes.' Farmer Jones is always cruel to his animals no matter how hard they work for him. He just uses them for work and when they are of no use any more he sends them to their deaths to get rid of them and make some more money: 'You, Boxer, the very day those great muscles of yours lose their power, Jones will send you to the knacker, who will cut your throat and boil you down for the fox-hounds. ...read more.

the farm soon forgot their existence.' At first, you might think that it is kind of Napoleon to educate the young puppies, but later on you find out that he wasn't educating them at all, but turning them against everyone apart from himself. Also, the milk and apples episode; when Napoleon has all the milk and apples, he gets his sidekick Squealer (who represents all the propaganda ministers supporting Stalin) to tell everyone false things: 'Comrades! You do not imagine, I hope, that we pigs are doing this in a spirit of selfishness and privilege?... Our soul object in taking these things is to preserve our health. Milk and apples contain substances absolutely necessary to the well-being of a pig.' Napoleon performs many other betrayals, and when the animals ask him why he is doing so, he gets Squealer to tell them that if they don't stop asking him questions then Mr Jones will come back. Thus, he is using fear to control the animal population, just like Stalin did in Soviet Russia. Soon enough, Napoleon starts seeing Snowball as a threat, and starts plotting against him. When Snowball wanted to get a windmill made, everyone was with him: 'Napoleon stood up and, casting a peculiar side-look at Snowball, uttered a high-pitched whimper of a kind no-one had ever heard him utter before. ...read more.

When Boxer hurts his leg, Napoleon sends him to the knacker's, telling everyone that he is going to the vets: 'The animals crowded around the van. ?Goodbye Boxer, Goodbye! Fools! Fools!? shouted Benjamin, prancing around them and stamping the earth with his small hoofs. ?Fools! Do you not see what is written on the side of that van?... He read ?Alfred Simmonds, Horse slaughterer and glue-boiler, willingdon. Dealer in Hides and Bone-Meal. Kennels Supplied?. Do you not know what this means? They are taking Boxer to the knackers!...?Boxer!? she cried, ?Boxer! Boxer! Boxer!? and just at that moment, as though he had heard the uproar outisde, Boxer's face, with the white stripe down his nose, appeared at the small window at the back of the van. ?Boxer!? cried Clover in a terrible voice. ?Boxer! Get out! Get out quickly! They are taking you to your death!' Those are Boxer's last moments with the animals, it was so sad that he trusted Napoleon so much and he got betrayed so badly. He does everthing for Napoleon and then he gets betrayed so badly. Animal Farm is an allegoric tale of the Russian Revolution. Some of the characters represent: Old Major; Karl Marx, Mr Jones; Tsar Nicholas ll, Animalism; Communism, Snowball; Leon Trotsky, Napoleon; Joseph Stalin and lots of others. You may think that this story is a simple fairy tale, but if you read it with an open mind, you will realise that it has a much deeper meaning to it... ...read more.