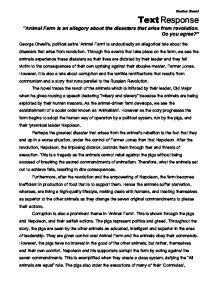 &quot;Animal Farm is an allegory about the disasters that arise from revolution. Do you agree?&quot;

Shekhar Shastri Text Response "Animal Farm is an allegory about the disasters that arise from revolution. Do you agree?" George Orwell's, political satire 'Animal Farm' is undoubtedly an allegorical tale about the disasters that arise from revolution. Through the events that take place on the farm, we see the animals experience these disasters as their lives are dictated by their leader and they fall victim to the consequences of their own uprising against their abusive master, Farmer Jones. However, it is also a tale about corruption and the terrible ramifications that results from communism and a story that runs parallel to the Russian Revolution. The novel traces the revolt of the animals which is initiated by their leader, Old Major when he gives rousing a speech declaring "misery and slavery" because the animals are being exploited by their human masters. As the animal-driven farm develops, we see the establishment of a social order known as 'Animalism'. ...read more.

Corruption is also a prominent theme in 'Animal Farm'. This is shown through the pigs and Napoleon, and their selfish actions. The pigs represent politics and greed. Throughout the story, the pigs are seen by the other animals as educated, intelligent and superior in the area of leadership. They are given control over Animal Farm and the animals obey their commands. However, the pigs have no interest in the good of the other animals, but rather, themselves and their own comfort. Napoleon and his supporters corrupt the farm by acting against the seven commandments. This is exemplified when they create a class system, defying the "All animals are equal" rule. The pigs also order the executions of many of their 'Comrades', disobeying the "No animal shall harm another animal" rule. These actions are justified by squealer's propaganda and secretly changing the phrasing of the seven commandments. In addition, they lie in the treatment of the loyal Boxer, declaring that he is going to a retirement farm, when in fact; he has been taken away for meat processing. ...read more.

Before his death, Old Major spoke of a society where animals rule and where there is "perfect unity" between all animals. After the revolution on the farm, the animals exist in a 'Communist' society, and for a time, they are all treated evenly. However, eventually, the beliefs of equality begin to deteriorate, and the animals start living on two levels; the pigs, superior, and the other animals, hard-working, cheated, exploited and restrained by their leaders. The pigs live a better life than the other animals; drinking and eating food that the other animals work so hard to produce, and sleeping in beds and living in a house, again, contrary to the seven commandments. Their beliefs of egalitarianism between animals fade away in unison as the final commandment "All animals are equal, but some animals are more equal than others" is written above the door of the barn. These final moments highlight the tragedy of this novel by suggesting that bad leaders are eventually replaced by equally bad leaders, and that revolutions, however justified, fail. ...read more.