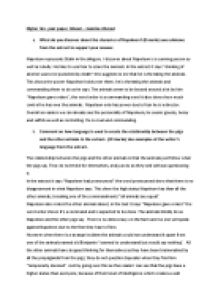 ﻿Higher tier- past paper- Edexel ? Jasmine Ahmed 1. What do you discover about the character of Napoleon? (8 marks) use evidence from the extract to support your answer. Napoleon represents Stalin in the allegory. I discover about Napoleon is a cunning person as well as a bully. He likes to use fear to scare the animals. In the extract it says ?drinking of alcohol was to be punished by death? this suggests to me that he is threating the animals. This shows the power Napoleon holds over them, he is threating the animals and commanding them to do as he says. The animals seem to be bossed around a lot by him ?Napoleon gave orders?; the word order is a commanding word it also shows how much control he has over the animals. ...read more.

(10 marks) Use examples of the writer?s language from the extract. The relationship between the pigs and the other animals is that the animals just follow what the pigs say. They do not think for themselves, and just do as they told without questioning it. In the extract it says ?Napoleon had pronounced? the word pronounced show that there is no disagreement in what Napoleon says. This show the high status Napoleon has than all the other animals, breaking one of the commandments ?all animals are equal?. Napoleon also orders the other animals about, in the text it says ?Napoleon gave orders? the word order shows it?s a command and is expected to be done. ...read more.

Just by going over this as the reader I can see that the pigs have a higher status than everyone, because of their level of intelligence which creates a wall between the other animals and the pigs take advantage of this. Orwell shows the readers how powerful language can be. None of the animals doubt Squealer, and even if they did he would find his way out of it using all his lies or just be threating them by saying Jones could come back, the animals were not suspicious of why ?overturned pot of white paint? was laying there. The dogs ?immediately make a ring around Squealer? this again shows the higher status. The dogs seem like bodyguard. Bodyguards are only used for very important high well known people. The dogs also acted out as a shield to show fear towards the animals. ...read more.