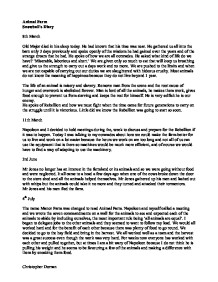 Animal Farm Snowball's Diary 8th March Old Major died in his sleep today. He had known that his time was near. He gathered us all into the barn only 3 days previously and spoke openly of the wisdom he had gained over the years and of the strange dream that he had. He spoke of how we are all comrades. He asked what kind of life do we have? 'Miserable, laborious and short.' We are given only so much to eat that will keep us breathing and give us the strength to carry out a days work and no more. We are pushed to the limits and when we are not capable of carrying out our duties we are slaughtered with hideous cruelty. Most animals do not know the meaning of happiness because they do not live beyond 1 year. The life of an animal is misery and slavery. Remove man from the scene and the root cause of hunger and overwork is abolished forever. Man is lord of all the animals, he makes them work, gives food enough to prevent us from starving and keeps the rest for himself. He is very selfish he is our enemy. ...read more.

Napoleon disagreed with everything I said these days and he seemed to be splitting the ranks of followers and causing unrest among us. I decided we should build a windmill for the good of the farm, which would supply electrical power and build it in the long pasture not far from the farm buildings. This would help work many of the electrical appliances on the farm. I spent many hours drawing up the plans and everyone was impressed except Napoleon who was against it. We put it to the vote when all the animals assembled in the barn. Napoleon looked like he was gaining everyone's confidence until I spoke of how the electricity could operate threshing machines, ploughs, harrows, rollers besides supplying every stall with its own electric light, hot and cold water and an electric heater. I knew I had everyones vote of confidence until I heard a high-pitched whimper from Napoleon and saw nine enormous dogs bounding towards me. Napoleons henchmen, dogs raced into the barn barking viciously at me. I realised that I had to run for my life because I could see their great white fangs ready to bite into me and also how angry and eager they were for blood. ...read more.

I spent many painstaking weeks working on those plans and all Napoleon could do was take little interest in them, take my plans from me, kick me off the farm and take over my position on the farm. I will strike back by gathering up supporters from neighbouring farms by spreading the word of 'Defeat Napoleon.' We need to overcome Napoleons new rules and focus on regaining Old Major's rules - "all animals are equal" or "no animal shall sleep in a bed", 'whatever goes upon two legs is an enemy" and "no animal shall kill any other animal" I will have to put my ideas into action, many of the animals on animal farm were my comrades and were willing to back be up only for Napoleons intervention. I will discreetly speak to the pigeons when night falls and encourage them to fly to other farms and stir up a rebellion amongst the animals. I will arrange meetings every so often to discuss strategies that I was going to use on Jones farm. Although I was against the use of firearms, I think the time has come to train ourselves in their use, to protect ourselves against the dogs and to finish Napoleon quickly. When I return I will not flee, I will defend what I believe in, I will stand my ground, I WILL BE BACK. Christopher Dornan ...read more.

A solid piece of writing that employs some language devices and figurative language. Further variety could have been shown in the structure of the piece to make each entry more individual; paragraphing, sentence starters, length of sentences and variety of punctuation.
4 Stars