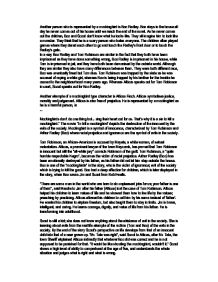 Another person who is represented by a mockingbird is Boo Radley

Another person who is represented by a mockingbird is Boo Radley. Boo stays in the house all day he never comes out of his house until we reach the end of the novel. As he never comes out the children, Boo and Scout don't know what he looks like. They all imagine him to look like a monster. They think that he is a scary person who hates everyone. The children often played games where they dared each other to go and touch the Radley's front door or to touch the Radley's gate. In a way Boo Radley and Tom Robinson are similar in the fact that they both have been imprisoned as they have done something wrong, Boo Radley is imprisoned in his house, while Tom is imprisoned in jail, and they have both been demonised by the outside world. Although they are similar they also have many differences between them. They were both different race, Boo was eventually freed but Tom dies. Tom Robinson was trapped by the state as he was accused of raping a white girl, whereas Boo is being trapped by his brother for the trouble he caused to the neighbourhood many years ago. Whereas Atticus speaks out for Tom Robinson in court, Scout speaks out for Boo Radley. Another example of a mockingbird type character is Atticus Finch. ...read more.

Most of the places the movie has melancholy music to produce the feeling of thoughtful sadness. The pleasant arrangements of musical notes in the movie create an atmosphere where we feel that we are a part of the movie, and we go back into our nostalgic memories and look back into our childhood. The movie itself seems like a mockingbird song. My favorite scene in the movie is when Atticus is walking out of the courtroom after the trial is over and all the "colored" people sitting in the balcony stands up to pay respect to Atticus, a white man, who tried his level best to save a "Negro." The Reverend says to Scout who was sitting, "Stand up Jean Louise. Your father is passing." The scene says it all, there is not much dialogue but the expressions on the faces of the black people was marvelous, with a slow melancholy music at the background. As it this situation there is nothing left to say, because everyone knows in the courtroom that Tom Robinson is not guilty but still the jury has convicted him of the rape, just because of racial prejudice. Nelle Harper Lee was born on April 28 1926 in Monroeville Alabama. Monroeville is in southwest Alabama, about halfway between Montgomery and Mobile. She is the youngest of four children of Amasa Coleman Lee and Frances Finch Lee. ...read more.

To Kill a Mockingbird contains criticism of the prejudice and moral laziness that allowed Southern society to have a double standard of justice. The novel also presents a somewhat optimistic view of white Southerners that was somewhat unusual at the time the novel appeared. The story indicates there are good human beings like Atticus Finch everywhere, even in the midst of a corrupt society. Even those who do wrong, the novel goes on to suggest, often act out of ignorance and weakness rather than a deliberate impulse to hurt others. There are always a few readers who feel that the novel offers an overly optimistic and simplified view of human nature. On the other hand, the hopeful note it strikes may be one of the reasons for the book's great popularity. The author does not ignore the existence of evil in society, but she does suggest that human beings are born with a desire to do the right thing. Although most readers think of To Kill a Mockingbird as a novel about racial prejudice, you will notice that the mockingbird theme does not apply only to victims of this form of discrimination. Boo Radley, the eccentric recluse, is another "harmless creature" who becomes a victim of cruelty. Here again, the author seems to be emphasizing the universality of human nature. Tom Robinson's problems may be bound up with the complex social problem of racial prejudice, but any neighborhood can have its Boo Radley, all but forgotten except as the subject of gossip and rumor. ...read more.