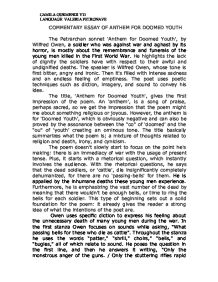 COMMENTARY ESSAY OF ANTHEM FOR DOOMED YOUTH The Petrarchan sonnet 'Anthem for Doomed Youth', by Wilfred Owen, a soldier who was against war and aghast by its horror, is mostly about the remembrance and funerals of the young men killed in the First World War. He highlights the lack of dignity the soldiers have with respect to their awful and undignified deaths. The speaker is Wilfred Owen, whose tone is first bitter, angry and ironic. Then it's filled with intense sadness and an endless feeling of emptiness. The poet uses poetic techniques such as diction, imagery, and sound to convey his idea. The title, 'Anthem for Doomed Youth', gives the first impression of the poem. An 'anthem', is a song of praise, perhaps sacred, so we get the impression that the poem might me about something religious or joyous. However, the anthem is for 'Doomed Youth', which is obviously negative and can also be proved by the assonance between the "oo" of 'doomed' and the "ou" of 'youth' creating an ominous tone. ...read more.

Owen questions the proper way to remember the youth, yet his only answer is the sounds of the war overcoming the sounds of the death ceremonies. In the second stanza, Owen focuses on sights. He uses the words "candles," "shines," and "glimmers" to imply sight. He asks, "What candles may be held to speed them all" and answers "Not in the hands of boys but in their eyes / Shall shine the holy glimmers of goodbyes". Owens answer compares the candles of the ceremony to the tears in the eyes of the youths loved ones. His answer is that they will be remembered with sadness, but the war will continue to kill more youth and cause more sadness. The three devices mentioned before (alliteration, onomatopoeia, and assonance), sculpture the sound, slowing the pace down and drawing the attention to the idea of making the objects more humanized. Owen uses alliteration of the 'R' sound in words, "rifle's rapid rattle" suggesting the sound of the rifles as do words such as "stuttering", "rattle", and "patter". ...read more.

This line helps the reader imagine the unconsciousness of the soldiers about the war being something honorable and patriotic (specified in the poem "Dulce et Decorum Est"), but willing to die for it in embarrassing and horrible consequences, completely dehumanized. The third imagery is in the last stanza "The pallor of girls' brows shall be their pall", which represents the paleness of the women's faces lamenting the soldiers' deaths with the coffins that won't be used. "Anthem for Doomed Youth" shows how passionately Owen is against the war and what is does to the youth of the world. Owen himself was a young man fighting in the war, and knew firsthand the effects it had on those like himself. He personally used to mark a contrast between the violence of life and the quiet rituals of home life to shock the reader what it really was about to fight in the war for ones country and just be left there like it you weren't even considered a person. Word count: 1088 CAMILA GURMENDI Y11 LANGUAGE VALERIA PETRONAVE ...read more.