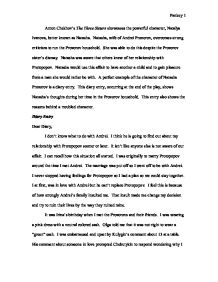 Anton Chekhov's The Three Sisters showcases the powerful character, Natalya Ivanova, better known as Natasha. Natasha, wife of Andrei Prozorov, overcomes strong criticism to run the Prozorov household. She was able to do this despite the Prozorov sister's dismay. Natasha was aware that others knew of her relationship with Protopopov. Natasha would use this affair to have another a child and to gain pleasure from a man she would rather be with. A perfect example of the character of Natasha Prozorov is a diary entry. This diary entry, occurring at the end of the play, shows Natasha's thoughts during her time in the Prozorov household. This entry also shows the reasons behind a troubled character. Diary Entry Dear Diary, I don't know what to do with Andrei. I think he is going to find out about my relationship with Protopopov sooner or later. It isn't like anyone else is not aware of our affair. I can recall how this situation all started. I was originally to marry Protopopov around the time I met Andrei. The marriage was put off so I went off to be with Andrei. I never stopped having feelings for Protopopov so I had a plan so we could stay together. I at first, was in love with Andrei but he can't replace Protopopov. I feel this is because of how strongly Andrei's family insulted me. That insult made me change my decision and try to ruin their lives by the way they ruined mine. It was Irina's birthday when I met the Prozorovs and their friends. I was wearing a pink dress with a neutral colored sash. Olga told me that it was not right to wear a "green" sash. I was embarrassed and upset by Kulygin's comment about 13 at a table. His comment about someone in love prompted Chebutykin to respond wondering why I was embarrassed. The laughter that followed forced me out of the room and to Andrei. Andrei comforted me and we soon got married. ...read more.

Andrei comforted me and we soon got married. Bobik was my first and only child with Andrei. I recall one day, a candle being left lit. I still wonder who left it lit. I now remember, I did. After Bobik originally became ill, I requested to put him in Olga's room so he can be warm. This would have put Olga in the same room with Irina. I love Bobik with all my heart but he still resembles one I don't truly love. I knew from day one that Andrei's sisters despised me. I respect the sisters but I do not like them. I wasn't shocked when I found out earlier that Masha said I was the one sick not Bobik. After asking Irina to relinquish her room for Bobik, I was able to enjoy a pleasant time with Protopopov for once. I know that the people were mad since I cancelled the party that day due to Bobik, but who really cares? As time went on, I had Sofochka. Andrei never realized that she wasn't his child. I wonder why he failed to see that she didn't even resemble him but resembled Protopopov. I got pregnant the night with Protopopov after my cancellation of the party. Olga was angry for what I said about Anfisa. I still do not have any regrets about what I said. This situation occurred the night of the town's big fire. I told Olga that Anfisa is a peasant and of no use. Olga couldn't even stop me as I practically controlled the whole household along as I was with Andrei. I was able to get hold of money when Andrei mortgaged the house. He alone does not own the house, which made my deed even better. The others soon realized that Andrei owed "everyone" some money. I soon realized that my quest for revenge was going rather well. ...read more.

Those sisters hopefully started to realize what they done to me was wrong. I was trying to live a new life without Protopopov but with Andrei. I did not stop my quest until the family began to tear apart. Now, I am all "alone". I invited Protopopov to come to the house during the sudden departures. It wasn't wrong to have Protopopov sit with Sofochka and Andrei to sit with Bobik. I mean, the children are sitting with their real fathers. I got some revenge on the Prozorov sisters for their comment on my sash by telling Irina that her sash didn't suit her at all. I don't know how I am going to break off my marriage to Andrei. He is a good man but I don't truly love him. I feel bad by what I might do to Bobik. I never wanted to hurt him or even Sofochka. Sofochka would likely be hurt because she believes Andrei is her father as well. I just don't know what to do. Despite what I did, I have succeeded with my outsmarting of the Prozorovs and others. Critical Comment on Diary Entry: Natasha from The Three Sisters is truly a powerful character. Natasha's actions throughout the story show what one would do to hurt others. This character changes from shy to evil in a matter of a year. The diary entry shows the person Natasha really is. Natasha only cared about getting back with Protopopov and getting even with the Prozorovs. This is seen when Natasha all of sudden leaves with Protopopov after the party with the circus people was cancelled (278). Natasha was able to control the whole household right before everyone's eyes. The entry also shows a recount of how Natasha lived her life with the Prozorov family. The wife of a weakened Andrei took him for advantage and easily became head of a weakened family. Natasha's wrath shattered dreams of Moscow from the Prozorovs. The wrath by Andrei's wife shows similarity to Emma from Madame Bovary. Both women were able overtake their husband's lives, resulting in dreadful demises. ...read more.