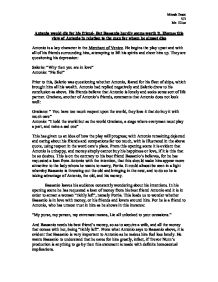 Antonio would die for his friend- But Bassanio hardly seems worth it. Discuss this view of Antonio in relation to the man for whom he almost dies

Antonio would die for his friend- But Bassanio hardly seems worth it. Discuss this view of Antonio in relation to the man for whom he almost dies Antonio is a key character in the Merchant of Venice. He begins the play upset and with all of his friends surrounding him, attempting to lift his spirits and cheer him up. They are questioning his depression: Salerio: "Why then you are in love" Antonio: "Fie fie!" Prior to this, Salerio was questioning whether Antonio, feared for his fleet of ships, which brought him all his wealth. Antonio had replied negatively and Salerio drew to his conclusion as above. His friends believe that Antonio is lonely and seeks some sort of life partner. Gratiano, another of Antonio's friends, comments that Antonio does not look well: Gratiano: " You have too much respect upon the world, they lose it that do buy it with much care" Antonio: "I hold the world but as the world Gratiano, a stage where everyman must play a part, and mine a sad one" This has given us an idea of how the play will progress; with Antonio remaining dejected and caring about his friends and companions far too much, with is illustrated in the above quote, using respect in the word care's place. ...read more.

saying that he would not mind if Bassanio did ruin him financially, as long as Bassanio understood that Antonio believed and loved him completely. Ahead of the trial, where Antonio faces death, he says the following: " Pray God Bassanio come to see me pay my debt, and then I care not" This can be seen in a multitude of ways, for example, Antonio may have realised that Bassanio has used him, and taken advantage of his trust, and this statement was intended ironically. Alternatively Antonio genuinely would like to see his best friend, who has made him feel appreciated for the duration of the play. He simply would like to spend his last moments with the man, whom he cares greatly for. On the other hand Antonio would simply like Bassanio to understand and see how much Antonio cares for him, which results in the reader noticing a degree of homosexuality from Antonio towards Bassanio. Finally, Antonio may want Bassanio to feel guilty for his dis-regard has cost Antonio his life. By making sure Bassanio is there to watch his death he would ensure Bassanio is left with the weight of his death to haunt him for life. ...read more.

A final view is that Antonio does love Bassanio greatly, but his love is not with homosexual intent, but fatherly love. A father's love for his son is endless, and this would explain why Antonio is willing to lose all that he owns, and his own life for Bassanio. Overall, it can be said that Bassanio is not worth all that Antonio gives him. There is an everlasting speculation that Bassanio may simply be taking advantage of Antonio for his wealth. As well as this, Bassanio is only there for his best friend when the chips are down, essentially making sure that his own golden parachute wont be burst by any misfortune that Antonio may suffer. The final question left is the form of Antonio's love for Bassanio. In Trevor Nunn's production of the play Antonio performs with a hint of homosexuality through out. However otherwise, it must be said that Antonio's love is simply like that of a father for a son. When Bassanio requests a loan from Antonio so that he may pursue Portia, Antonio has no hesitation is accepting his proposal. If Antonio's love had gone any further than that of a father then I believe he would have had a personal problem with loaning this money to Bassanio. Mitesh Desai 5J3 Mr. Elliot ...read more.