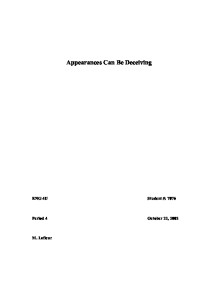 Appearances Can Be Deceiving - The Great Gatsby.

Appearances Can Be Deceiving ENG 4U Student #: 7076 Period 4 October 22, 2002 M. Lafleur In 1808, Sir Walter Scott penned, "O, what a tangled web we weave/When first we practise to deceive!" (Marmion 6.17) In life, people often lie and use people in order to preserve an ideal self-image or to get what they want. However, there are often serious repercussions for those who lie and for those around them. In F. Scott Fitzgerald's novel, The Great Gatsby, this theme that deception and self-centeredness has consequences is clearly illustrated. Through the eyes of the narrator, Nick Carraway, the reader saw that the wealthy characters in this novel lived in a superficial society surrounded by their own lies and deception. Many of the residents of East and West Egg used one another in order to get what they wanted, with little care as to how it would affect the people around them, and perhaps, even themselves. To others, their lives seemed perfect; they had everything that money could buy. This image, however, was proven to be no more than a fa�ade. Deceit almost always leads to unhappiness as Daisy, Tom and Gatsby himself illustrated in the course of the novel; they deceived one another and used those around them in order to get what they wanted. ...read more.

Tom Buchanan was, without a doubt, very lucky to be married to Daisy. To their friends, they seemed to be the perfect couple. But, appearances can be deceiving. In reality, their relationship was only a show put on by them to maintain their social standing. It was not merely the fact that Tom was cheating on Daisy, but that he was cheating on her with a woman of a far lower social status. In the words of Miss Baker, "Tom's got some woman in New York" (Fitzgerald 15). Tom was a hypocrite. Although he was having an affair, he did not approve when Daisy spent time with Gatsby. But Tom's adulterous affair did not deceive the public for long. When his infidelity became public it affected his standing in the community and neither Daisy nor Tom could deal with these societal pressures. As a result, Tom and Daisy were forced to leave New York and create a new life elsewhere. Tom remained with Daisy because she defined his social standing. Daisy had an excellent reputation among the elite. She had never done anything to embarrass herself: "They moved with a fast crowd, all of them young and rich and wild, but she came out with an absolutely perfect reputation" (Fitzgerald 78). Tom used her not only for her wealth, but also for her impeccable social standing. He never expressed his guilt about lying to Daisy. ...read more.

His existence became one enormous lie. Gatsby's deception and his true personality were finally revealed with disastrous consequences to himself. In turn, Gatsby, a man who was supposed to have an image of wealth and self-confidence, was, in fact, proven to be cowardly and insecure. And in the end, despite all his lies and all of his manipulative actions, he lost Daisy, the woman of his dreams. But Gatsby's lie regarding Daisy's involvement in the car accident, created his own destiny - his death. An overview of East and West Egg from Nick Carraway's perspective reveals how the characters in the novel abused one another's trust. They lied, they deceived and they used one another to obtain what they wanted at any cost. Indeed, the people who surrounded Nick were determined to obtain a glorified sense of happiness, and it was Nick, the narrator of The Great Gatsby, who exposed the extent to which the characters would go to achieve this sense of security and illusive happiness. Tom and Daisy never attained happiness in the course of the novel. Their strong reputation was ruined and they were forced to leave New York. But the consequences of Gatsby's lies were much more serious - irreparable, in fact. His deception resulted in his death; his fate was sealed. And so, as the final page of The Great Gatsby is read, we, the readers, are left with a valuable message from Fitzgerald - that our approach to life can greatly interfere with the pursuit of happiness. ...read more.