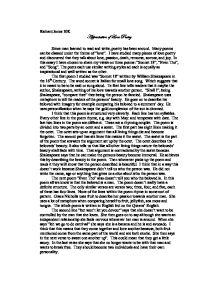 Richard Jones 10K Appreciation of Love Poetry Since man learned to read and write, poetry has been around. Many poems can be classed under the theme of "love". I have studied many pieces of love poetry and discovered that they talk about love, passion, death, remorse, sorrow, and joy. In this essay I have chosen to share my views on three poems: "Sonnet 18", "Even Tho", and "Song". The poets each use similar writing styles ad each is equally as inspirational and well written as the other. The first poem I studied was "Sonnet 18" written by William Shakespeare in the 16th Century. The word sonnet is Italian for small love song. Which suggests that it is meant to be to be said or sung aloud. Te first line tells readers that it maybe the author, Shakespeare, writing of his love towards another person. "Shall I", being Shakespeare, "compare thee" thee being the person he fancied. Shakespeare uses metaphors to tell the readers of the persons' beauty. He goes on to describe his beloved with imagery for example comparing his beloved to a summers' day. ...read more.

Then whenever picks up the poem and reads it they will know that the person described is beautiful. I think that in a way this doesn't work because Shakespeare didn't tell us who the person was. He did not write the name, age or anything that gives us a clue about who the person was. The next poem "Even Tho" also doesn't tell you who the beloved is. In this poem all we know is that the beloved is a man. The poem doesn't really have a definite structure. The only similar verses are verses two; three, four, and five, each of these has four lines. None of the lines within the poem rhyme in some sort of pattern. Grace Nicholls uses fruit to describe her passion towards another man. She uses a lot of metaphors when comparing herself to fruit, jellyfish, sea moss and tongue. The whole poem is written in English but no the Queens' English. The second line "but won't let you devour" says that she doesn't want to be controlled by the man that she loves. ...read more.

The first verse I think basically says stop everything, a man is dead, remember and respect him. The next verse is similar using lines that symbolise death. In verse three Auden uses metaphors to describe his love towards the man. The first line "he was my north, my south, my east and west" says to me that Auden thought that man was everything for him. He then says that he thought his love would last forever, but he was wrong. The last verse is heartbreaking. Auden gives the impression that he cannot go on living without the man anymore. He says that everything is worthless so nothing in this world means anything to him. I think that these poems are al brilliantly written. Each one is different in its own way. My favourite poem has to be "Even Tho". I liked the Caribbean writing style and irregular structure. I think that the younger generation would appreciate it as well. "Even Tho" was fun to read. It was different from the others because it didn't talk negatively about love. It was cheerful and creates a happy feeling. ...read more.