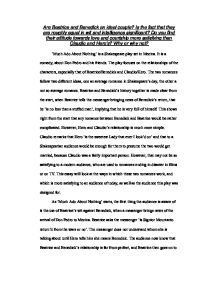 Are Beatrice and Benedick an ideal couple? Is the fact that they are roughly equal in wit and intelligence significant? Do you find their attitude towards love and courtship more satisfying than Claudio and Hero's? Why or why not?

Are Beatrice and Benedick an ideal couple? Is the fact that they are roughly equal in wit and intelligence significant? Do you find their attitude towards love and courtship more satisfying than Claudio and Hero's? Why or why not? 'Much Ado About Nothing' is a Shakespeare play set in Mecina. It is a comedy, about Don Pedro and his friends. The play focuses on the relationships of the characters, especially that of Beatrice/Benedick and Claudio/Hero. The two romances follow two different ideas, one an average romance in Shakespeare's day, the other a not so average romance. Beatrice and Benedick's history together is made clear from the start, when Beatrice tells the messenger bringing news of Benedick's return, that he 'is no less than a stuffed man', implying that he is very full of himself. This shows right from the start that any romance between Benedick and Beatrice would be rather complicated. However, Hero and Claudio's relationship is much more simple. Claudio remarks that Hero 'is the sweetest Lady that ever I look'd on' and that to a Shakespearian audience would be enough for them to presume the two would get married, because Claudio was a fairly important person. However, that may not be so satisfying to a modern audience, who are used to romances ending in disaster in films or on TV. ...read more.

Come hither Leonato, what was I you told me of today, that your niece Beatrice was in love with Signior Benedick'. They discuss this nearby where Benedick is 'hiding' from them, on purpose, so he can hear everything they say. He believes everything they say 'I would think this a gull, but that the white bearded fellow speaks it', and because he believes it so quickly it implies to the audience that he probably already had feelings for Beatrice. Hero and Ursula gull Beatrice, and, like Benedick, she also falls for it straight away 'and I believe it better than revoltingly.' Because they fell for it so easily, it does suggest to the audience that there was probably an attraction already between the two. This satisfies both the audiences of today and then, as it would not seem right (even now) for the two of them to fall in love simply because of what someone has said. Hero and Claudio's relationship is much different. There love is based much more on 'fairytale' love. They have a much simpler relationship (at first), which involves the two of them, simply deciding they love each other, and so getting married. 'Count take of me my daughter, and with her my fortunes' This sort of love would have been seen as normal to the audience Shakespeare originally wrote this play for, but to an audience of today it would seem utterly ridiculous that two people would decide to get married without even getting to know each other properly. ...read more.

This relationship would have been most satisfying to the Shakespearian audience, because it was very simple and basic. It had a slight problem, which made it interesting to watch, but it was basically a 'and they all lived happily ever after' style love which was the sort of love common then. However, to an audience of today, seeing something happen that simply, and then continuing after Hero had been publicly humiliated would seem ridiculous and pointless, and not all satisfying. Beatrice and Benedick's relationship would be a lot more satisfying to an audience of today. No relationship is perfect, and theirs was no exception. There was plenty of tension between the two the whole way through, and you didn't really know whether it was going to end one way, or another. It was also more realistic, because they didn't suddenly see each other and think 'that's the one for me'. They worked on their relationship, and sorted out their problems, before they got married. However, to a Shakespearian audience this relationship would seem confusing, and strange, as it was not they way they were used to people behaving. Also, to see a character like Beatrice behaving in the way she did would have just been strange. In conclusion, in Shakespeare's play 'Much Ado About Nothing', the relationships of the characters Beatrice and Benedick would have satisfied an audience of today, whereas the relationship of Hero and Claudio would have satisfied the Shakespearian audience it was originally written for. Matt McDonald ...read more.