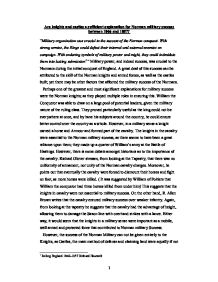 Are knights and castles a sufficient explanation for Norman military success between 1066 and 1087?

Are knights and castles a sufficient explanation for Norman military success between 1066 and 1087? "Military organization was crucial to the success of the Norman conquest. With strong armies, the Kings could defeat their internal and external enemies on campaign. With enduring symbols of military power and might, they could intimidate them into lasting submission1" Military power, and indeed success, was crucial to the Normans during the initial conquest of England. A great deal of this success can be attributed to the skill of the Norman knights and armed forces, as well as the castles built; yet there may be other factors that affected the military success of the Normans. Perhaps one of the greatest and most significant explanations for military success were the Norman knights; as they played multiple roles in ensuring this. William the Conqueror was able to draw on a large pool of potential leaders, given the military nature of the ruling class. They proved particularly useful as the king could not be everywhere at once, and by have his subjects around the country, he could ensure better control over the country as a whole. However, in a military sense a knight owned a horse and Armour and formed part of the cavalry. The knights in the cavalry were essential to the Norman military success, as there seems to have been a great reliance upon them; they made up a quarter of William's army at the Battle of Hastings. ...read more.

This harsh technique of forced submission eventually worked and William obtained control of the North militarily. Moreover, it could be suggested that the extent of the Norman military success was a reflection of the poor condition of England both politically and militarily. Prior to the Norman conquest, England had been particularly de-centralised, which made defense against attack unreliable, particularly with the North being so detached from the south. For example when Hadrada joined Tostig and landed in Yorkshire to overthrow Harold, the Northern earls Edwin and Morcar did not put a system of defense into action. Another factor that weakened the Anglo-Saxon defenses was the lack of castles to keep invaders at bay. Additionally the Anglo- Saxon system of the Fyrd was weak, and the all or nothing nature of it was a serious drawback, as there was little or no rotation of troops, or any guarantee of obtaining extra soldiers rapidly. This ultimately meant that there was no army waiting or readily available to defend against William when he landed on the south coast. Moreover, the military success of the Normans was also due to William's leadership of the army and his advanced planning before battle. Before the battle of Hastings, William, according to the twelfth century poet Wace, assembled 696 ships. William also started a diplomatic offensive by winning the support of the Papacy, and made sure that any potential enemies were neutralized through marriages, wars or alliances. ...read more.

Yet the factor of chance cannot be dismissed as a contributor to the Norman military success. Perhaps the outcome would have been different had Harold waited for his reinforcement troops from London before fighting William. It was also unfortunate that Harold's troops had only fought three weeks prior to the battle of Hastings, and this were tired from combat and marching. The Norman military success may have also been different if Harold had died at Stamford Bridges, or if both Harold's brothers hadn't been killed in battle. Due to the reliability of the sources we are also not able to determine whether apparently deciding tactics such as the fake retreats were decided course of action or just occurred from a rumour that William was dead. Thus it would seem that chance played a major role in deciding the military success of the Normans. Hence, it would seem that all the factors played a part in ensuring Norman military success; the knights and cavalry ensured good attacking methods whilst the castles ensured control over the kingdom. Additionally, William's army tactics helped him to succeed in the conquest. Yet all these factors may not have had any influence had it not been for the bad timing and poor condition of England both in a political and military sense. So the Norman military success between 1066 and 1087 owes itself not only to knights, castles and military strength but also other factors such as chance. ...read more.