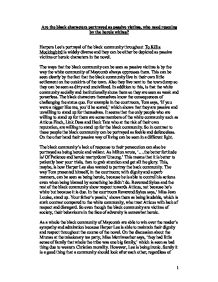 Are the black characters portrayed as passive victims, who need rescuing by the heroic whites?

Are the black characters portrayed as passive victims, who need rescuing by the heroic whites? Harpers Lee's portrayal of the black community throughout To Kill a Mockingbird is widely diverse and they can be either be depicted as passive victims or heroic characters in the novel. The ways that the black community can be seen as passive victims is by the way the white community of Maycomb always oppresses them. This can be seen clearly by the fact that the black community live in their own little settlement on the outskirts of the town. Also they live next to the town dump so they can be seen as dirty and uncivilized. In addition to this, is that the white community socially and institutionally shuns them so they are seen as weak and powerless. The black characters themselves know the consequences of challenging the status quo. For example in the courtroom, Tom says, 'If you were a nigger like me, you'd be scared,' which shows that they are passive and unwilling to stand up for themselves. It seems that the only people who are willing to stand up for them are some members of the white community such as Atticus Finch, Link Deas and Heck Tate who at the risk of their own reputation, are willing to stand up for the black community. So in contrast to these people the black community can be portrayed as feeble and defenceless. On the other hand their passive way of living can be seen in a different light. ...read more.

This reveals that even though she had a lack of formal education she was able to overcome this and succeed in learning how to read. In turn she taught Zeebo how to read and at church he does the lining because the congregation does not know how to read. This portrays the black community as being weak because they are illiterate but strong because they are able to help each other out. As part of the Finches' family she is criticised by scouts narrative perspective but the reader can see that Calpurnia always has Scout's interests in mind. This can be seen when Calpurnia tells Scout off for being rude to Walter Cunningham, 'That boy's yo' comp'ny and if he wants to eat up the table cloth you let him, you hear?,' this informs us that Calpurnia is showing Scout how to treat people who are not as privileged as her and by saying, 'you hear?,' she makes sure she gets the message across. She teaches Scout good manners and even Atticus admits that he couldn't get by without her. Even with her strong character we can feel sympathy for her because she doesn't even know her birthday. This can be seen as horrific because this tells us she was ripped from her mother at an early age and sold off to be a slave, so she never knew her mother and never will. She however like all the other black characters can be seen as a passive victim because she is always being undermined by Aunt Alexandra and must be defended by Atticus. ...read more.

Calpurnia telling her off always annoys scout but this is nothing to do with colour, it is plainly the fact that she is young and doesn't like being told what to do. Each child is heartbroken when they learn the harsh realities of racism. Scout shows her feelings towards racism when the talk about Miss Gates, 'how can you hate Hitler so bad an' then turn around and be so ugly about folks right home,' thus showing that Scout sees through her hypocrisy and understanding that what she is doing is wrong. Then Jem shows his emotions straight afterwards by saying to Scout, 'I never wanta hear about that courthouse again, ever, ever, you hear me? You hear me?' this shows his emotions and the repetition of the words emphasized on how much the racism has affected him. During the trial when Dill gets upset Dolphus shows that he dos not want to be associated to the racism and that is why he lives like a tramp even though his family is rich. Another way Lee portrays the black community is through the use of mouthpiece, when both Dolphus and Atticus point out the injustice of racism. So through the eyes of the children, Lee is able to give an unbiased view of the black community and they are seen as heroic and brave. So in conclusion Harper Lee is trying to make this novel look realistic and she does so by making seem oppressed and as passive victims but she is also able to make them seem heroic at times. 1 ...read more.