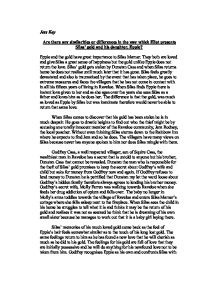 Are there any similarities or differences in the way which Eliot presents Silas&amp;#146; gold and his daughter, Eppie?

Jess Kay Are there any similarities or differences in the way which Eliot presents Silas' gold and his daughter, Eppie? Eppie and the gold have great importance to Silas Marner. They both are loved and give Silas a great sense of happiness but the gold unlike Eppie does not return the love. Silas' gold gets stolen by Dunstan Cass and when Silas returns home he does not realise until much later that it has gone. Silas feels greatly devastated and also is traumatised by the event that has taken place, he goes to extreme measures and faces the villagers that he has not come in contact with in all his fifteen years of living in Raveloe. When Silas finds Eppie there is instant love given to her and as she ages over the years she sees Silas as a father and loves him as he does her. ...read more.

Dunstan the man who is responsible for the theft of Silas' gold promises to keep the secret about Godfrey's wife and child but asks for money from Godfrey now and again. If Godfrey refuses to lend money to Dunstan he is petrified that Dunstan my let the word loose about Godfrey's hidden family therefore always agrees to lending his brother money. Godfrey's secret wife, Molly Farren was walking towards Raveloe when she feeds her drug addiction of opium and falls over. The baby no longer in Molly's arms toddles towards the village of Raveloe and enters Silas Marner's cottage where she falls asleep next to the fireplace. When Silas sees the child in his home he struggles to tell what it is and thinks it may be the return of his gold and realises it was not as seemed he think that he is dreaming of his own small sister because he manages to work out that it is a baby girl laying there. ...read more.

Silas' newfound treasure, the child is named Hephzibah after a biblical character but Eppie for short. As Silas is parenting Eppie he wants nothing but the best for her so he feeds her with interests, needs and church attendance. These things re-connect Silas and the villagers where Silas becomes a known member of their community. Eppie brings Silas to friendship from the villagers whereas the gold now much forgotten made him distant from all that. Now sixteen years on Eppie is grown up and asks Silas' blessing so that she may marry Aaron Winthrop, a gardener who is helping create Silas' and Eppie's new garden. Silas and Eppie's closeness is at such great heights they cannot be parted so Eppie tells Silas that if she wed Aaron they shall all live together under one roof. Eppie has replaced the gold in so many good ways for Silas he wants nothing in his life to be altered. ...read more.