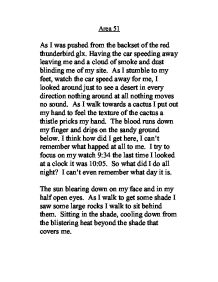 Area 51 As I was pushed from the backset of the red thunderbird glx. Having the car speeding away leaving me and a cloud of smoke and dust blinding me of my site. As I stumble to my feet, watch the car speed away for me, I looked around just to see a desert in every direction nothing around at all nothing moves no sound. As I walk towards a cactus I put out my hand to feel the texture of the cactus a thistle pricks my hand. The blood runs down my finger and drips on the sandy ground below. I think how did I get here, I can't remember what happed at all to me. I try to focus on my watch 9:34 the last time I looked at a clock it was 10:05. So what did I do all night? I can't even remember what day it is. The sun blearing down on my face and in my half open eyes. As I walk to get some shade I saw some large rocks I walk to sit behind them. Sitting in the shade, cooling down from the blistering heat beyond the shade that covers me. I sat there for a while and then started to walk towards the hillside and after 10 minutes I wanted to stop. ...read more.

I rolled out from under the bush and started to walk to the base. It was harder than I thought. Walking took a lot out of me, half way thought there was a lot of movement at the base as if they were getting ready for some thing some think big. I ran over to the base and hid behind 5 huge oil tankers. As I watch army men rushing out of one of the three buildings a jet plane came rushing by just taking off. Over a loud speaker it was announced that they were looking for a man in a black top and brown pants and where he had been and came from. They knew that I had cut my finger on that cactus how long had they been following me. They don't know where I am now. I ran over to the building that every one had left or so I thought. As I entered there was 30 - 40 people in the building listening to a tape on area 51. After the tape a man at the front dressed in a green army suit said, "Some one is trying to break in, we think he is trying to get into our archives, to get confidential forms that could crush area 51 and all of you". ...read more.

As I walked out of the room a voice told me to stop I ran towards the lift just as I got there a gun shot went off. I hit the button to go up. I fell and sat in the corner of the lift and I was thinking why I was here. An alarm was sounded as I reach the top of the lift the doors opened and I walked out men were still in a hurry running about. I made a break for freedom. I ran in to the 1st room I was in, it was all clear. I got rid of the hardhat and coat and hid it in a box. I ran to the oil tanks stop and made a break for the hill I came over men were running after me. At the top of the hill I fell over and could see the rain cloud. There were now 40 to 50 people running after me. A helicopter took off and came after me by this time it was dark and the spot light was covering me. It helped me see where I was going. I ran past the rocks, under the rain cloud. I hit my arm on the cactus and cut my arm up. I could see 10 people on the horizon. Then the car I was throne out of came back the door opened and I got in. ...read more.