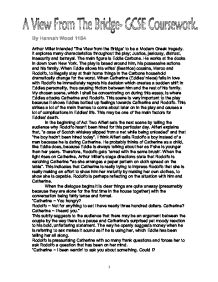 Arthur Miller intended &amp;#146;The View from the Bridge&amp;#146; to be a Modern Greek tragedy

By Hannah Wood 11S4 Arthur Miller intended 'The View from the Bridge' to be a Modern Greek tragedy. It explores many characteristics throughout the play; Justice, jealousy, distrust, insecurity and betrayal. The main figure is Eddie Carbone. He works at the docks in down town New York. The play is based around him, his possessive actions and his family. When Eddie allows his wifes' (Beatrice) cousins, Marco and Rodolfo, to illegally stay at their home things in the Carbone household dramatically change for the worst. When Catherine (Eddies' niece) falls in love with Rodolfo he immediately regrets his decision which creates a sudden shift in Eddies personality, thus causing friction between him and the rest of his family. My chosen scene, which I shall be concentrating on during this essay, is where Eddies attacks Catherine and Rodolfo. This scene is very important to the play because it shows Eddies bottled up feelings towards Catherine and Rodolfo. This strikes a lot of the main themes to come about later on in the play and causes a lot of complications in Eddies' life. This may be one of the main factors for Eddies' death. In the beginning of Act Two Alfieri sets the next scene by telling the audience why Rodolfo hasn't been hired for this particular day. Alfieri explains that, "a case of Scotch whiskey slipped from a net while being unloaded" and that "the boy hadn't been hired today". I think Alfieri calls Rodolfo a boy instead of a man because he is dating Catherine. He probably thinks of Catherine as a child, like Eddie does, because Eddie is always talking about her as if she is younger than her years. Therefore, Rodolfo gets 'tarred with the same brush'. When the light rises on Catherine, Arthur Miller's stage directions state that Rodolfo is watching Catherine "as she arranges a paper pattern on cloth spread on the table". ...read more.

Catherine really wants the two important men in her life to get along so she tries to explain Eddies' unpredictable character to Rodolfo. Catherine explains about him criticising her all the time because she really wants him to understand. She describes her dreams of her wedding and thinks of a way of gaining Eddies trust. But the idea of moving to Italy has changed, because originally it was meant for her and Rodolfo to have a new life but now it has been replaced as a way of satisfying Eddie. It could show minor feelings for Eddie. Rodolfo realises how this whole situation is really making Catherine miserable and I think Rodolfo feels really sorry for her so doesn't challenge her again. He knows she has had enough. Catherine says that she loves Rodolfo, but he then replies with comment, which again, has a hint of humour. "Rodolfo ~ Then why are you afraid? That he'll spank you?" He dismisses her personal confession. This could be put down to him not taking Catherine seriously and might imply that he is using her. I think that Catherine at this point will be (secretly) at breaking point with Rodolfo because he isn't making any effort to understand her situation. He isn't taking her thoughts into consideration and is making it out to be some kind of a joke. But maybe it was just a na�ve, honest question. "Catherine ~ You don't know; nobody knows! I'm not a baby, I know a lot more than people think I know. Beatrice says to be a woman, but-" With Catherine bringing up the subject of Beatrice it's obvious that the conversation between Beatrice and Catherine earlier on in the play has been playing on her mind. She must have been thinking about what Beatrice said to her and tried to act on the advice given. It is Beatrice who is quick to 'keep the ball rolling' in a conversation and to help gloss over and neutralise difficulties and reactions in the many conversations. ...read more.

By rights they oughta throw you back in the water. Bui got pity for you. (He moves uneasily toward the door, always facing Rodolfo.) Just get outa here and don't lay another hand on her unless you wanna go out feet first. (He goes out of the apartment.)" The scene ends with a final threat from Eddie. This looms over the audience and makes them, feel threatened. This scene has a huge dramatic impact on the audience if it is done properly because it is such an important twist to the end of the play. With Eddie calling Rodolfo "submarine" it shows In this scene a lot of the stage is used a lot because the actors who play Catherine and Rodolfo need to show distance from Eddie, but also need to show closeness between them. The whole of this play involves symbolism, on many different levels. The end scene, in which Eddie takes his own life with his own knife, is symbolic of the self-destructive nature that led to such an ending. As Arthur Miller wished to write 'a Modern Greek tragedy' it is likely that the symbolism of the dagger is Eddies' sexuality, which drove him to his drastic actions and eventually death. During the confrontation earlier in the play Marco raised a chair like a weapon, symbolic of the fight yet to come. Rodolfo danced with Catherine when she had previously been attending to Eddie, symbolic of him taking her from Eddies' life. Catherine becomes scared that Eddie is going to do something extreme and Beatrice gets right out of the way to try to avoid the confrontation. Beatrice is a very subdued character. Eddie becomes extremely offended at Rodolfo's presence in his house because its his 'territory' and the plaguing thought he is able to show Marco who is boss. Eddie doesn't allow any compromise, for example; he doesn't allow Beatrice to go to Catherine's wedding, he doesn't forgive Rodolfo and he doesn't want to look like a coward and stands up against Marco. He basically sealed his own fate. ?? ?? ?? ?? 2 1 ...read more.