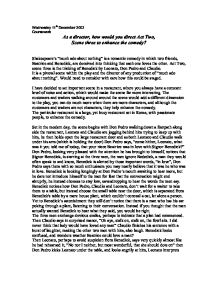 As a director, how would you direct Act Two, Scene three to enhance the comedy? Shakespeare's &quot;much ado about nothing&quot; is a romantic comedy in which two friends, Beatrice and Benedick,

Wednesday 11th December 2002 Coursework As a director, how would you direct Act Two, Scene three to enhance the comedy? Shakespeare's "much ado about nothing" is a romantic comedy in which two friends, Beatrice and Benedick, are deceived into thinking that each one loves the other. Act Two, scene three is the tricking of Benedick by Leonato, Don Pedro and Claudio. It is a pivotal scene within the play and the director of any production of "much ado about nothing". Would need to consider with care how this could be staged. I have decided to set important scene in a restaurant, where you always have a constant level of noise and action, which would make the scene far more interesting. The customers and waiters walking around around the scene would add a different dimension to the play, you can do much more when there are more characters, and although the customers and waiters are not characters, they help enhance the comedy. The particular restaurant is a large, yet busy restaurant set in Rome, with passionate people, to enhance the comedy. Set in the modern day, the scene begins with Don Pedro walking down a footpath along side the restaurant, Leonato and Claudio are jogging behind him trying to keep up with him, he then holds open the large restaurant door and as both Leonato and Claudio walk under his arm (which is holding the door) ...read more.

Don Pedro gives a disguised smile, to Leonato indicating that he had corrected his sentence, and it had passed off well. Benedick changes his look of confusion to hope, and says quietly in an almost "dream like" manor, "Is't possible?" he looks to the beautifully decorated ceiling of the restaurant "Sits the wind in that corner?" Benedick still starring at the ceiling, losses balance and falls of his chair, to the ground, a waiter carrying an open bottle of red wine is tripped by Benedick's body, and accidentally pours the contents of the bottle onto Benedick's clean white shirt, The waiter storms off into the kitchen, while Benedick looks dazed by the conversation he has just over heard, takes his seat again and acts as if almost nothing has happened. Don Pedro, Claudio and Leonato know what has happened and all three face down into the table putting their fists into their mouth, to stop the sounds of laughter, portrayed by the rest of the restaurant. Leonato then says, nearly forgetting what to say, "By my troth, my lord, I cannot tell what to think of it", he pauses, forgetting what to say and continues, "But that she loves him with an enraged affection, it is past infinite of thought." Leonato speaks clearly and loudly, but the words, "love" and "enraged" are particularly said with exceptional enthusiasm. ...read more.

Then Don Pedro asks, "Why what effects of passion shows she?" He says the word "passion" quieter than the rest of the sentence, which is spoken relatively loud, and at that point his head lowers looking onto his plate. Claudio then says, "Bait the hook well, this fish will bite." He says this under his breath, and at the end of his sentence he bangs his fist against the table, rattling the plates as he does so. Benedick doesn't hear the words very well, and puts his ear to the table, in an attempt to hear more clearly, however he gets shocked by the bang of the fist on the table he falls down. Benedick is hit by someone's foot, and the faces above the table indicate their pleasure in his pain, however Benedick struggles to conceal his pain, and even cries out at one point, but restraints himself from doing so again. Benedick puts his fist in his mouth to prevent him from crying with pain, however he instead losses balance and falls to the ground, hitting one of the men's foot, to which Leonato then kicks Benedick. Don Pedro pushes Leonato to tell him that the plan will be spoilt if Benedick knows that they are there. The three men look very content and happy with there trickery. I believe that there is much comic potential within this scene, and I have tried to show this through my chosen setting. ...read more.