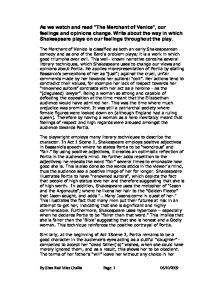 As we watch and read The Merchant of Venice, our feelings and opinions change. Write about the way in which Shakespeare plays on our feelings throughout the play.

As we watch and read "The Merchant of Venice", our feelings and opinions change. Write about the way in which Shakespeare plays on our feelings throughout the play. The Merchant of Venice is classified as both an early Shakespearean comedy and as one of the Bard's problem plays; it is a work in which good triumphs over evil. This well- known narrative contains several literary techniques, which Shakespeare uses to change our views and opinions about Portia. He applies misrepresentation of Portia by stating Bassanio's perceptions of her as "just"; against the cruel, unfair comments made by her towards her suitors: "colt". Her actions tend to contradict their values, for example her lack of respect towards her "renowned suitors" contrasts with her act as a heroine - as the "(disguised) lawyer". Being a woman so strong and capable of defeating the opposition at the time meant that the Elizabethan audience would have admired her. This was the time where much prejudice was prominent. It was still a patriarchal society where female figures were looked down on (although England had a ruling queen). Therefore by having a woman as a hero inevitably meant that feelings of respect and high regards were aroused amongst the audience towards Portia. The playwright employs many literary techniques to describe the character. ...read more.

Likewise, she declares that she "commits (herself) to (Bassanio) to be directed" mirroring the fact that she is humbled before her man, which further reinforces her qualities of a good Elizabethan wife since she submits herself to her man. Portia is further shown to be generous when she allows Bassanio to "pay (Shylock) six thousand and deface the bond." Also, she lets her husband go on her "wedding day" to "dispatch all business", which exemplifies her kindness to a greater extent because no bride would be willing to allow their husband to depart on their nuptials. This questions the audiences' indefinite judgement of her as she has suddenly transformed from a racist offender to a charitable spouse. This promising image of her prolongs as she "disguises" herself as a "man in court" and proves herself to be resourceful by defending Antonio - her husband's friend over the protagonist Jew. At this time, England was a Christian country. The Elizabethans and all Christians were anti-Semitic and therefore the Elizabethan audience would have been delighted by the fact that Portia would shortly get "Shylock" prosecuted. Shakespeare demonstrates Portia as a Christian gentlewoman, who considers it her duty to show Shylock the foolishness of his exact interpretation of the law that has no mercy. She appeals to Shylock's character and gives him a chance to get out of the bond. ...read more.

Also, as women, they tend to like Portia because she sets an excellent example of women. Alternatively, Portia is then shown to be heartless again for the last time in the final scene. Here she is manipulative and harsh saying that "(she) will ne'er come in (Bassanio's) bed until (she) sees the ring", even though she does have the ring after all. Then she goes on to tell him that "for the ring the doctor (did) lay with (her)." This shows how cold she is, stirring feelings of jealousy and sadness in her lover's heart - amused by his misery. Shakespeare has portrayed Portia in this way because he wants the audience to feel annoyed towards her. Yet, some Elizabethans may admire her as it shows Portia, a woman, to be strong and independent; nonetheless her action will still be seen as insensitive in all eyes. In conclusion, Portia is quick-witted, wealthy and beautiful. She epitomises the virtues that are typical of Shakespeare's heroines - it is no surprise that she emerges as the antidote to Shylock's malice. However, unlike the heroines whose portrayal stays praiseworthy throughout the narrative, Portia's depiction tends to vary from scene to scene or sometimes even line to line. Shakespeare uses many literary techniques to change our feelings towards her, which leaves us unsure of what to think of her. This uncertainty adds suspense to Shakespeare's play which makes it interesting for the audience to watch. ?? ?? ?? ?? By Shaz Rai/ Miss Challis Page: 1 06/10/2009 ...read more.