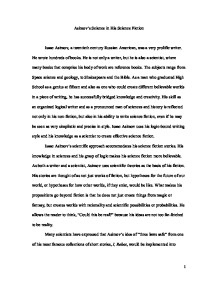 Asimov's Science in His Science Fiction

Asimov's Science in His Science Fiction Isaac Asimov, a twentieth century Russian American, was a very prolific writer. He wrote hundreds of books. He is not only a writer, but he is also a scientist, where many books that comprise his body of work are reference books. The subjects range from Space science and geology, to Shakespeare and the Bible. As a man who graduated High School as a genius at fifteen and also as one who could create different believable worlds in a piece of writing, he has successfully bridged knowledge and creativity. His skill as an organized logical writer and as a pronounced man of sciences and history is reflected not only in his non-fiction, but also in his ability to write science fiction, even if he may be seen as very simplistic and precise in style. Isaac Asimov uses his logic-bound writing style and his knowledge as a scientist to create effective science fiction. Isaac Asimov's scientific approach accommodates his science fiction stories. His knowledge in sciences and his grasp of logic makes his science fiction more believable. As both a writer and a scientist, Asimov uses scientific theories as the basis of his fiction. His stories are thought of as not just works of fiction, but hypotheses for the future of our world, or hypotheses for how other worlds, if they exist, would be like. What makes his propositions go beyond fiction is that he does not just create things from magic or fantasy, but creates worlds with rationality and scientific possibilities or probabilities. ...read more.

Byerley is never outsmarted and is shown as a man who is in control of any situation because he seems to have all the solutions to all possible outcomes, especially when he is defending himself against attacks on his "humanism". Byerley seems almost too mathematical to be human, so it makes more sense for him to be the advanced robot superior in intellect to the average human. For his human adversaries, on the other hand, Asimov writes on the other extreme. They are imperfect, emotional, and become frustrated easily. They seem to eat their words with every legal and ethical technicality Byerley produces because nothing they can say or produce ever proves Byerley as a genuine robot. What is impressive about this characterization of humans is that their irrationality is not apparent until a more rational character such as Byerley points it out. The reason we, the readers do not catch this unless it is pointed out is because it may be the rational the average human would use. We would be inclined to assume that a man is a robot if we heard the reason of his accusation as a man never eats or sleeps. Byerley, or rather Asimov, explains the irrationality of this assumption that to use, may seem like a rational assumption. "'So-and-so is a robot because he hardly eats with people, and I have never seen him fall asleep in the middle of a case; and once when I peeped into his window in the middle of the ...read more.

This ability makes an effective writer, and Asimov achieves this mystery-like structure because of his science thinking mind. He uses an approach that reminds one of a science experiment log or a mathematical proof where there are pieces of a puzzle to be patched together, solving the mysterious questions of universe that always seem to appear in his science-fiction. His skill as an organized logical writer and as a pronounced man of sciences and history is reflected not only in his non-fiction, but also in his ability to write science fiction, even if he may be seen as very simplistic and precise in style. This is apparent in many of his more developed short stories with his trademarks- the science-bound style and topic, the creation of the characters using his skill in rational thought, and the structure he is able to write in using his ability to logically organize and build a story without weak links. Definitely, Asimov can be called both a scientist conjoined with a writer to create not only effective creative writing, but also to explore further into the depths of science and our human relation to technology. Perhaps one day we will find ourselves implementing the Three Laws of Robotics and credit a man, an author, as a scientist who created not just a fictional future, but a real future through the science behind the fiction. ?? ?? ?? ?? 1 ...read more.