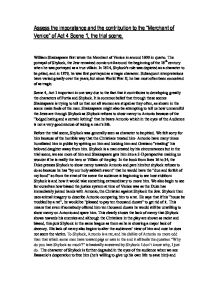 Assess the imporatance and the contribution to the &quot;Merchant of Venice&quot; of Act 4 Scene 1, the trial scene.

Assess the imporatance and the contribution to the "Merchant of Venice" of Act 4 Scene 1, the trial scene. William Shakespeare first wrote the Merchant of Venice in around 1600 in quarto. The potrayal of Shylock, the Jew remained comic until around the beginning of the 18th century when he was portrayed as a true villain. In 1814, Shylock's role was depicted as a character to be pitied, and in 1879, he was first portrayed as a tragic character. Subsequent interpretations have varied greatly over the years, but since World War II, he has most often been conceived of as tragic. Scene 4, Act 1 important in one way due to the fact that it contributes to developing greatly the characters of Portia and Shylock. It is common belief that through these scenes Shakespeare is trying to tell us that not all women are stupid as they often, as shown in the scene make fools of the men. Shakespeare might also be attempting to tell us how unmerciful the Jews are through Shylock as Shylock refuses to show mercy to Antonio because of the "lodged hating and a certain lothing" that he bears Antonio which in the eyes of the Audience is not a very good excuse of taking a man's life. ...read more.

of the flock meetest for death" meaning that he has now become old and he would have died anyway soon so he might as well get his life done and over with now. Gratiano then reinforces the impression that we get of Shylock in the trial scene by calling him a "damned inexecrable dog" that is unmerciful and "wolvish, bloody, starved and ravenous". Here animal imagery is again used by Shakespeare to describe human beings. The animal imagery is used in order to descibe how humans sometimes can act like the wildest animals. By relying on the defence that his actions are justified simply because he feels like them, Shylock appears unpredictable, unjustified and whimsical, and he further fuels our perception of his actions as careless and cruel. The trial scene develops the character of Shylock into a complete shape, before the scene he was presented as a man who was the creation of circumstance, now we are seeing the other side of him: the one that is unmerciful, desperate for revenge, unkind and killing a man just because he feels like it. ...read more.

The emphasis that Portia put on the quality of mercy clearly shows how she and probably other Elizabethans at the time thought that mercy was something that "droppeth as the gentle rain from heaven". Also in my opinion the villain in the plays at that time would not have been expected show mercy and considering the massive amount of racism that was present in the English community at that time, the audience would have found Shylock's pitiful demise quite funny something we fail to even imagine today. Another quite important thing that is in the Merchant of Venice is the concept of Mercy vs Justice. Shylock is driven by Hatred and unfairness and is wholeheartedly committed to taking his pound of flesh from Antonio and thus almost certainly killing him. He has many opputunities to give mercy but refuses. Warned that without mercy all stand condemned by the law he repeats, "What judgement shall I fear, doing no wrong?". This is very ironic because once Portia turns the table on him, it is Shylock's life that hangs in the balance and he is made to kneel and beg before the duke for mercy. The duke is quite merciful and forgives Shylock but Antonio has a couple of very harsh conditions if he is To fo ...read more.