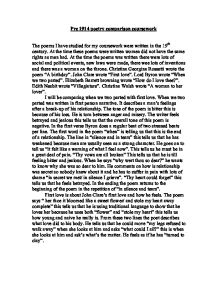 Pre 1914 poetry comparison coursework The poems I have studied for my coursework were written in the 19th century. At the time these poems were written women did not have the same rights as men had. At the time the poems was written there were lots of social and political events, new laws were made, there wee lots of inventions and there was a woman on the throne. Christina Georgina Rossetti wrote the poem "A birthday". John Clare wrote "First love". Lord Byron wrote "When we two parted". Elizabeth Barrett browning wrote "How do I love thee?". Edith Nesbit wrote "Villegiature". Christina Walsh wrote "A woman to her lover". I will be comparing when we two parted with first love. When we two parted was written in first person narrative. It describes a man's feelings after a break-up of his relationship. The tone of the poem is bitter this is because of his loss. He is torn between anger and misery. The writer feels betrayed and jealous this tells us that the overall tone of this poem is negative. In the first verse Byron does a regular beat of two stressed beats per line. The first word in the poem "when" is telling us that this is the end of a relationship. ...read more.

to be raised made from exotic fabrics and materials. Rosseti's use of orders at the beginning of lines implies that she is really keen to celebrate her joy, "raise me", "Hang it", "Carve it", "Work it". She wants to make it tangible for other people. The ending of the poem affirms her feelings of gladness. In the last two lines she suggests that her lover has come to her therefore she is happy: she repeats the last two lines of the first verse with a slight change, "Because the birthday of my life, is come, my love is come to me". How do I love thee was written by Elizabeth Barrat Browning. A famous poet of the day declared he lover her poems and her, and her passionate love for him changed her life. Her domineering (really strict) father banned her from marrying him so they decided to escape by eloping to Italy. They married in secret and true of his word her father disinherited her. The poet or narrator speaks to her lover. She tells him how much she loves him. She uses the sonnet form (a fourteen line rhyming poem with a regular rhythum and structure). ...read more.

"through the blossom climbed and kissed me". The last line may jolt the reader because the tone is harsh, bitter and probably unexpected. The narrator appers quite modern in her dismissal of the lover. It is unclear though whether she is responding to being jilted or whether she is making the first move. "A woman to her lover" we don't know much about Christina Walsh she is the person who wrote this poem. At the time this poem was written women never had the same right as men. The poem opens on an angry tone with the use of a question. The poet clearly has a negative view of the way men treat women. She uses words which suggest slavery "vanquished", boldslave ", "wearing out", "drudgery", silence", and "servant". She is prepared to reward her lover with love and marriage, as long as there is equality between them " then o husband I am yours forever And our so-equal love will make the stars to laugh with joy" personification is used here to show how her happiness is so great that even the stars will share it. The final line of the poem implies that this idea of equality in marriage is favoured by god and brings you closer to him, "hand holing hand Until we reach the very heart of god." ?? ?? ?? ?? ...read more.