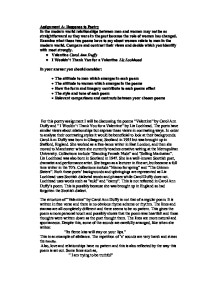 Assignment A- Response to Poetry

Assignment A- Response to Poetry In the modern world relationships between men and women may not be as straightforward as they were in the past because the role of women has changed. Examine what these two poems have to say about women relate to men in the modern world. Compare and contrast their views and decide which you identify with most strongly. * Valentine Carol Ann Duffy * I Wouldn't Thank You for a Valentine Liz Lochhead In your answer you should consider: * The attitude to men which emerges in each poem * The attitude to women which emerges in the poems * How the form and imagery contribute to each poems effect * The style and tone of each poem * Relevant comparisons and contrasts between your chosen poems For this poetry assignment I will be discussing the poems "Valentine" by Carol Ann Duffy and " I Wouldn't Thank You for a Valentine" by Liz Lochhead. The poets have similar views about relationships but express these views in contrasting ways. In order to analyse their contrasting styles it would be beneficial to look at their backgrounds. ...read more.

There are approximately 10 lines in each stanza and the length of each of the lines is very similar. Although this poem is more structured and modern, I feel that is lacks the individuality of "Valentine". I think this poem was more thought out and has been planned more whereas "Valentine" was written as thoughts. Both poems show direct and personal declarations of love and use 'I' and 'You' to personalise the poems. Both poems are cynical towards the commercial side of love and reject the ideas of flowers and cards. Carol Ann Duffy doesn't write about the kissogram and satin hearts but compares love to an onion, although the comparisons made are true and have real meaning. The tonal shifts change quite a lot throughout the poem because it starts off as a loving poem but also describes love as being "lethal" and uses strong, harsh words such as "fierce". The mood of this poem is somewhat depressing, and it almost makes you want to fall in love. Words such as "lethal" and phrases such as " fierce kiss will stay on your lips" are not normally used in love poems and create an uncomfortable atmosphere. ...read more.

She also hints that men are buying the ladies presents which in turn will satisfy themselves such as flimsy underwear. She also talks of "ordering oysters" or "ironing my black satin sheets". Liz Lochhead also could possibly offend a female reader is she is disapproving these ideas- when another lady may love it. For example if a man bought his girlfriend a diamond ring and proposed , Liz Lochhead is rejecting this idea "If you sent me a solitaire and promises solemn.........you'd entirely fail to charm me , in fact I'd detest it". This may put some people off this poem if they find these things sentimental. I find that I relate with Carol Ann Duffy's "Valentine" better than " I wouldn't thank you for a Valentine" because it has deeper meaning and seems to be more serious and has really came from the heart. Liz Lochhead's poem still shows true feeling but she doesn't present it as well as Carol Ann Duffy. Some people may look at "Valentine" and laugh because the poet is comparing love to an onion but when you read the comparisons they are very true and meaningful. ...read more.