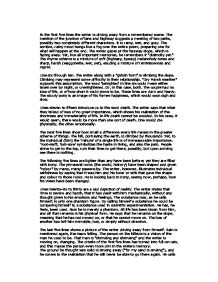 In the first five lines the writer is driving away from a remembered scene. The mention of the junction of lane and highway suggests a meeting of two paths, possibly two completely different characters. It is rainy, wet, and gray. The sombre, rainy mood hangs like a fog over the entire poem, preparing one for what will happen at the end. The writer gazes at the faraway slope, which is fading away. Yet, like all important memories, he remembers it "distinctly yet." The rhyme scheme is a mixture of soft (highway, byway) melancholy tones and sharp, harsh (waggonette, wet, yet), exuding a mixture of reminiscences and regret. Line six through ten. The writer along with a "girlish form" is climbing the slope. ...read more.

The next five lines show how small a difference every life makes in the greater scheme of things. The hill, portraying the earth, is climbed by thousands. Yet, to the individual (him) the 'minute' of a single life is of immeasurable importance. 'Foot-swift, foot-sore' symbolizes the haste in living, and also the pain. People strive to get to the top, ruin their lives to get there, possibly, but upon arriving see there is nothing. The following five lines are lighter than any have been before; yet they are filled with irony. The primaeval rocks (the world, history) have been shaped and given "colour" by many, many passers-by. The writer, however, illustrates individual selfishness by saying that it was him and his lover or wife that gave the shape and colour to those rocks. ...read more.

The last five lines shows a picture of the writer driving away from himself. Rain is mentioned again, like tears falling. The person on the hillside is a vision of the man he used to be. That man is "shrinking and shrinking" and the writer is moving on, changing. The drizzle of the first five lines has turned into full-on rain, and this makes the person even more dim in the writers memory. The ground he thought was solid is sinking away ("for my sand is sinking"), and he comes to the realization that he will never be able to go there again. He calls the "there" old loves domain, which means that he is moving on, perhaps to new love. The final line is abrupt, the shortest in the entire poem. This shows how quickly everything happened to him; without warning, all was gone. ...read more.