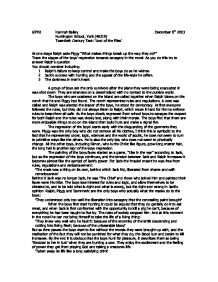 At one stage Ralph asks Piggy &quot;What makes things break up the way they do?&quot; Trace the stages of the boys' regression towards savagery in the novel. As you do this try to answer Ralph's question.

GTM2 Hannah Bailey December 9th 2003 Huntington School, York (48319) Twentieth Century Text: 'Lord of the Flies' At one stage Ralph asks Piggy "What makes things break up the way they do?" Trace the stages of the boys' regression towards savagery in the novel. As you do this try to answer Ralph's question. You should consider including: 1 Ralph's failure to keep control and make the boys do as he wishes. 2 Jack's success with hunting and the appeal of the life-style he offers. 3 The darkness in man's heart. A group of boys are the only survivors after the plane they were being evacuated in was shot down. They are stranded on a desert island with no contact to the outside world. The boys who are scattered on the island are called together when Ralph blows on the conch that he and Piggy had found. The conch represented rules and regulations. A vote was called and Ralph was elected the leader of the boys, he stood for democracy. At first everyone followed the rules, but they did not always listen to Ralph, which made it hard for him to enforce rules to keep them all safe. As the boys slowly regressed from school boys to savages the respect for both Ralph and the rules was slowly lost, along with their morals. The boys find that there are more enjoyable things to do on the island then build huts and make a signal fire. The regression of the boys' starts early with the disguarding of the garments they wore. ...read more.

are Roger barely remembers the rules to civilisation, and he is the only boy who kills a human alone, the murder of Simon was done as a group, but the murder of Piggy was Roger alone. You see how the instinct of savagery soon over takes the instinct of civilization, and even though the boys have been brought up well and told how to live and act, they forget this for something that they haven't been taught, but for something that is there inside them and can not be ignored, it also has more of an appeal to the boys, the style of living and the rush of excitement they get from it compensate for the loss of their rules, regulations and safety. Even the chanting about the pig is a sign of the boys' regression for they are all one syllable words, and very aggressive: 'Kill the Pig, cut her throat, spill her blood' They change from an orderly group of school boys, to a 'Pack of painted savages', the regression does start slow, with the disguarding of their garments, and it slowly builds up until they are total savages, talking about human sacrifices to the beats. The beast that frightens all the boys stands for the primal instinct of savagery that exists within all human beings. The boys are afraid of the beast, but only Simon reaches the realization that they fear the beast because it exists within each of them. As the boys descend further into savagery, their belief in the beast grows stronger. ...read more.

He talks to 'The Lord of the Flies' and finds out that the beast the boys made up was a rotting corpse, yet he is un-able to free the boys from this burden. The sow's head that Simon talks to explains to him what the real danger on the island is: '"There isn't anyone to help you. Only me. And I'm the Beast . . . Fancy thinking the Beast was something you could hunt and kill! . . . You knew, didn't you? I'm part of you? Close, close, close! I'm the reason why it's no go? Why things are the way they are?"' These words confirm Simon's speculation that the beast is in fact the boys themselves. The Lord of the Flies identifies itself as the beast and tells Simon that it exists within every human being. This darkness each of the boys has inside of them is the reason why things break up. At the end Ralph realises that everyone holds this desire to kill: 'Ralph wept for the end of innocence, the darkness of man's heart, and the fall through the air of a true, wise friend called Piggy.' The rescue is not a moment of happiness for Ralph even though it was all he seemed to want. He realizes that although he is saved from death on the island, he is not safe from the darkness. He has lost his innocence and learned about the evil that is within every human. Even at the height of civilisation and in children, ment to be the most innocent of people, there is this overwhelming presence of savagery. ...read more.