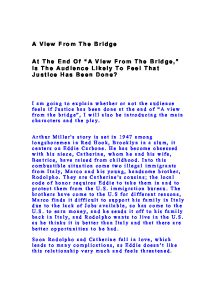 A View From The Bridge At The End Of "A View From The Bridge," Is The Audience Likely To Feel That Justice Has Been Done? I am going to explain whether or not the audience feels if Justice has been done at the end of "A view from the bridge", I will also be introducing the main characters and the play. Arthur Miller's story is set in 1947 among longshoremen in Red Hook, Brooklyn in a slum, it centers on Eddie Carbone. He has become obsessed with his niece, Catherine, whom he and his wife, Beatrice, have raised from childhood. Into this combustible situation come two illegal immigrants from Italy, Marco and his young, handsome brother, Rodolpho. They are Catherine's cousins; the local code of honor requires Eddie to take them in and to protect them from the U.S. immigration bureau. The brothers have come to the U.S for different reasons, Marco finds it difficult to support his family in Italy due to the lack of Jobs available, so has come to the U.S. to earn money, and he sends it off to his family back in Italy, and Rodolpho wants to live in the U.S. as he thinks it is better than Italy and that there are better opportunities to be had. Soon Rodolpho and Catherine fall in love, which leads to many complications, as Eddie doesn't like this relationship very much and feels threatened. Unable to cope with the possibility of Catherine's loss, Eddie tells Rodolpho to "pack his bags" and, in a further attempt to humiliate Rodolpho, kisses him passionately. After a visit to Alfieri the attorney to try to find some legal way to get rid of Rodolpho and being told again that he has to deal honestly with his feeling for Catherine, Eddie places an anonymous call to the Immigration authorities and betrays Marco and Rodolpho. When it becomes apparent that Eddie has betrayed Beatrice's cousins, the community shuns him and Marco spits in his face. ...read more.

Beatrice is the thread of reason that runs throughout the play. She is always able to rise above any situation created by Eddie she always try to create sanity in their lives even if it is at a terrible loss, as she did when Eddie didn't want her to go to Catherine's wedding and she accepted this. She is the one who is always attempting to pull Eddie back from the edge of darkness, and when he does fall over the edge as he did when he rang the immigration bureau she is the one who is always on his side and their to comfort him. The words that describe Catherine the most are lively, and innocent. Initially she is very much influenced by Eddie however she soon gains her independence thanks to Beatrice who encourages her to do so. Until now Catherine's security has been bound to her relationship with Eddie and Beatrice, she is genuinely unaware that there is anything improper in her relationship with Eddie and is horrified when Beatrice suggest that there might be more to the bond than she realises. Eddie heavily influenced her and for this reason she had doubts about Rodolpho however these doubts went once she got to know Rodolpho and he told her otherwise. She takes sides against Eddie after he betrays Marco and Rodolpho; this is the point in the play where she shows strength of character that has not been evident before. This strength was soon to vanish however when in the final moments of the play she murmurs her heartfelt regret for her part in Eddie's tragic end. The words that describe Marco most are Focused, strong, responsible and hardworking; the good thing about Marco is he has a strong sense of Justice and he cares very much about his family. When Marco enters he is seen as the stronger of the two brothers, he is aware of his obligations to the Carbones and therefore he asks his brother to behave in a manner that will not upset Eddie. ...read more.

Well this view of mine helped me in deciding whether justice had been done in "A View From The Bridge". I felt that Marco had done justice by killing Eddie as he ruined Marco's families life, however I felt that injustice was done to Marco as he had to go back to Italy and to a certain extent injustice was done to Catherine and Beatrice as they lost their family member and injustice occurred again when the two illegal immigrants found along with Marco and Rodolpho were sent back. Injustice occurs when someone who is totally innocent has something done wrong to him or her and justice occurs when a bad person has wrong done to him or her. I think that the audience would react like I would, as I asked many people who read the play and their views of justice about the play was similar to mine however I cannot speak for everyone, their maybe many people out there who feel differently and therefore this question is very difficult to answer but I think that Arthur Miller wrote the play in such a way that he allowed justice to be done but equally allowed injustice to be done as this would make it more interesting and realistic unlike the average book, play, or programme where they always have a hero doing right to everything bad or wrong, he was very ahead of his time and it makes it more fun and interesting, you go away thinking about it. So I conclude in saying that no I don't think that at the end of "A View From The Bridge" the audience feels that total justice or injustice has been done. In real life it is always good to have a difference of opinion, as this can help to keep a balance in the justice system. What one person may call just another would not and again the same for the play. It is good to make people think and make up there own conclusions. Viral Mehta ...read more.