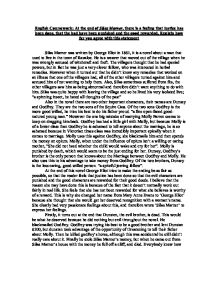 At the end of Silas Marner, there is a feeling that justice has been done, that the bad have been punished and the good rewarded

English Coursework: At the end of Silas Marner, there is a feeling that justice has been done, that the bad have been punished and the good rewarded. Explain how far you agree with this statement Silas Marner was written by George Eliot in 1861, it is a novel about a man that used to live in the town of Ravaloe. He is a weaver that moved out of the village when he was wrongly accused of witchcraft and theft. The villagers thought that he had special powers, but in fact he was just a very clever fellow, who was interested in herbal remedies. However when it turned out that he didn't know any remedies that worked on an illness that one of the villagers had, all of the other villagers turned against him and accused him of not wanting to help them. Also, Silas sometimes suffered from fits, the other villagers saw him as being abnormal and therefore didn't want anything to do with him. Silas was quite happy with leaving the village and so he lived his very isolated live; "a spinning insect, he hated all thoughts of the past" Also in the novel there are two other important characters, their names are Dunsey and Godfrey. ...read more.

She feels that she has not been rewarded for what she believes is worthy of a reward. This is why she changed her name from Mary Anne Evans to 'George Eliot' because she thought that she would get her deserved recognition with a woman's name. She clearly had very passionate feelings about this, and therefore wrote 'Silas Marner' to express her feelings. Firstly, it turns out at the end that Dunsten, the evil brother, is dead. This would be what he deserved because he did nothing but evil throughout the novel. He blackmailed Godfrey. Godfrey was trying his best to be a good brother and lent Dunstan �100, but dunstan took advantage of the opportunity of threatening to tell their father about Molly. Then he killed godfrey's horse, although this was accidental he still didn't really care about it. Finally he stole Silas Marner's money, but when he came out from Silas Marner's house with the money he fell off a cliff, and died. Everybody knew how much of a cheat and thief Dunsten was and so they didn't miss him, "nobody was sorry for his absence, or feared it would be too long" Secondly, you may feel that Silas Marner got what he deserved at the end of the novel. ...read more.

As we can see George Eliot does create the idea of justice at the end of this novel, the good in the poem, Eppie and Silas are not punished, as they have not done anything wrong, in fact Silas is even rewarded by getting his money back, becoming part of the community again and Eppie choosing to stay with him. However Godfrey is punished for what he has done by losing Eppie and his horse aswell as a lot of money. On the extreme part of punishment Dunstan and Molly were killed, throughout the novel they had done nothing but evil. They had both blackmailed Godfrey, and Dunstan had stolen Silas' money, and Molly had not been the caring, responsible parent that sher should be. In conclusion, I very much agree with the statement "At the end of Silas Marner, there is a feeling the justice has been done, that the bad have been punished and the good rewarded" I believe that the reason George Eliot chose to use this is because of the fact that she knows that in real life it doesn't normally work out that way. The fact the Nancy Lammeter is punished for Godfrey's mistake shows that no matter how hard you try, you can't always please everybody. ...read more.