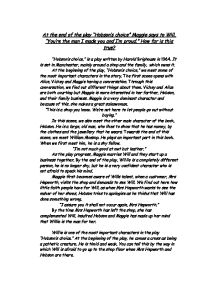 At the end of the play "Hobson's choice" Maggie says to Will, "You're the man I made you and I'm proud." How far is this true? "Hobson's choice," is a play written by Harold Brighouse in 1964. It is set in Manchester, mainly around a shop and the family, which owns it. At the beginning of the play, "Hobson's choice," we meet some of the most important characters in the story. The first scene opens with Alice, Vickey and Maggie having a conversation. Through this conversation, we find out different things about them. Vickey and Alice are both courting but Maggie is more interested in her farther, Hobson, and their family business. Maggie is a very dominant character and because of this, she makes a great saleswoman. "This is a shop you know. We're not here to let people go out without buying." In this scene, we also meet the other main character of the book, Hobson. He is a large, old man, who likes to show that he has money, by the clothes and the jewellery that he wears. Towards the end of this scene, we meet William Mossop. He plays an important part in this book. When we first meet him, he is a shy fellow. "I'm not much good at owt but leather." As the play progress, Maggie marries Will and they start up a business together. By the end of the play, Willie is a completely different person, he is no longer shy, but he is a very confident character who is not afraid to speak his mind. Maggie first becomes aware of Wills talent, when a customer, Mrs Hepworth, visits the shop and demands to see Will. We find out here how little faith people have for Will, as when Mrs Hepworth wants to see the maker of her shoes, Hobson tries to apologise as he thinks that Will has done something wrong. ...read more.

This shows that even though Willie is happy about not having to stay with Ada and face her mother, he doesn't know what to do, as he is scared about many things that would be involved within the change. Throughout this scene, we have seen discovered a lot about Willie's character. We have learnt how afraid he is. He has no ambitions and no confidence. These are vital thing s that any human needs to help them survive and become successful. Alice and Vickey enter the shop and Maggie tells them her plans to marry William Mossop. Her sisters can't stand the idea and think that it is ridiculous. They have no respect for Will and they don't want him to become part of their family as he embarrasses them. "What you do touches us, and your mistaken if you think that I'll own Willie Mossop for my brother-in-law." As soon as Hobson arrives home, Vickey tells him about Willie. He also has no respect for Willie and he cannot stand the fact that it might ruin his reputation if his daughter marries a boot-hand. "I'd be the laughing-stock of the place if I allowed it. I won't have it, Maggie. It's hardly decent at your time of life." Hobson is really against the whole plan and so he tries very unsuccessfully to try and talk Maggie out of it. Maggie then tells Hobson to pay her future husband and her a normal wage and she threaten him with the fact that, if one of them goes, they both go. Hobson still underestimates Willies value and so he accuses him of being "cheap." Assuming that it was Willies idea for him and Maggie to wed, he calls him up to the shop. Hobson's gets his belt out ready to beat him. Willie tries to put thing s right, he says, "I'm none wanting thy Maggie, it's her that's after me, but I'll tell you this, Mr Hobson; if you touch me with that belt, I'll take to her quick, aye, and stick to her like glue." ...read more.

Willie also makes another request, "William Mossop, late Hobson, is the name this shop u'll have." At this point, Maggie joins into the argument. She doesn't agree with Willie, she feels that he is being too harsh on Hobson. They decided on the name "Mossop and Hobson," after Will demanded it or they would go home. Once a settlement had been made, Hobson leave the room. At this point, Will asks Maggie if she thought that he was to hard on Hobson. He cannot believe himself what he has achieved and how well he stood up to Hobson. Will tries to replace Maggie's old wedding ring with a proper gold one, but Maggie refuses. "I'll wear your gold for show, but the brass stays where you put it, Will, and if we get to rich and proud we'll just sit down together quiet and take a long look at it, so as we'll not forget the truth about ourselves." Now at the end of the play, we have seen how much of an influence Maggie has had on Willie. She has changed him from a timid, shy lad, to a fully-grown, confident man. She has helped him go from a normal boot-hand to a successful businessman in less than a year. She has gained him loads of respect from all of the people that he knows. She no longer needs to defend him or back him up as he is no capable of doing this for himself. She is also teaching him literacy skills so that he can read and write himself. Through all of this, their relationship has become stronger and Willie no longer feels intimidated by Maggie. I think that through this story, Willie has changed physically, mentally and emotionally. At the end of the play, Maggie is really please as she has accomplished what she originally set out to do and not only has she gained respect for Willie, but she to has also gained her fathers respect. ...read more.