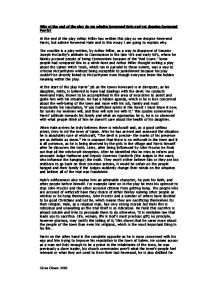 At the end of the play Arthur Miller has written this play so we despise Reverend Parris, but admire Reverend Hale and in this essay I am going to explain why.

Why at the end of the play do we admire Reverend Hale and yet despise Reverend Parris? At the end of the play Arthur Miller has written this play so we despise Reverend Parris, but admire Reverend Hale and in this essay I am going to explain why. The crucible is a play written, by Arthur Miller, as a way to disaprove of Senator Joseph McCarthy's attitude to Communism in the late 40's and early 50's, where he falsley accused people of being Communists because of the 'Red Scare.' Some people had compared this to a witch-hunt and Arthur Miller thought writing a play about the Salem Witch Trials, which ran in parralel to these events, was a way to criticise McCarthyism without being suceptible to punishment because his play couldn't be directly linked to McCarthyism even though everyone knew the hidden meaning within the play. At the start of the play Parris' job as the towns Reverand is in disrepute, as his daughter, Betty, is believed to have had dealings with the devil. ...read more.

For example later on in the play he tries his uptmost to stop John Proctor and the other accused citizens from getting hung. The people who are accused of withcraft have they choice of either falsley naming other people as witches or be hung themselves, John Proctor and a number of others have decided to be good Christians and not lie, which means they are sacrificing themselves for their religion. Hale, as a relgious man, has very strong morals but feels this is ridiculous and unavailing as the trial itself is so ridiculous. He feels this sacrifice is almost suicide and tries to persuade them to do otherwise, 'It is mistaken law that leads you to sacrifice. Life, woman, life is God's most precious gift; no principle, however glorious, may justify the taking of it,' this shows that he cares more about the people of the town than even his religious, which is the most important thing in his life. Parris on the other hand is the complete opposite as he is more concerned with his ego and him trying to improve his reputation in the town of Salem. ...read more.

Parris is very aware of everything that is happening and probably deep down he knows it is wrong and knows that he should bring a stop to all the deaths, but it would be too much of a loss for him to lose his job. He has already lost his wife, and now he is losing his daughter and niece to witchcraft and without a his job he would have nothing, as his job provides him with his house and food, but no money so he has nothing saved up to fall back on. In the end he loses his job and his niece runs off with his money so basically he gets what he deserves for allowing other peoples' lives to be ruined. By Act 3 and 4 Hale has realised what is going on in Salem and tries his hardest to right his wrongs, so he is still doing the right thing, and he deeply regrets his actions even though it was not his fault. The difference there of Hale doing what is right and Parris doing what is easy is the reason why one is admirable, yet the other is despisable. ?? ?? ?? ?? Oliver Gibson 10BK ...read more.