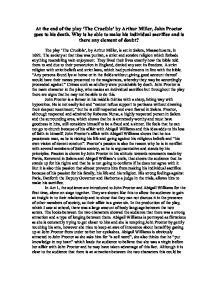 At the end of the play 'The Crucible' by Arthur Miller, John Proctor goes to his death. Why is he able to make his individual sacrifice and is there any element of doubt?

At the end of the play 'The Crucible' by Arthur Miller, John Proctor goes to his death. Why is he able to make his individual sacrifice and is there any element of doubt? The play 'The Crucible', by Arthur Miller, is set in Salem, Massachusetts, in 1692. The society at that time was puritan, a strict and sombre religion which forbade anything resembling vain enjoyment. They lived their lives exactly how the bible told them to and due to their persecution in England, denied any sect its freedom. A strict religion with strict beliefs and strict laws, which had punishments in line with the bible. "Any persons found lye at home or in the fields without giving good account thereof would have their names presented to the magistrates, whereby they may be accordingly proceeded against." Crimes such as adultery were punishable by death. John Proctor is the main character in the play, who makes an individual sacrifice but throughout the play there are signs that he may not be able to do this. John Proctor is a farmer in his middle thirties with a sharp, biting way with hypocrites. He is not easily led and "cannot refuse support to partisans without drawing their deepest resentment," but he is still respected and even feared in Salem. Proctor, although respected and admired by Rebecca Nurse, a highly respected person in Salem and the surrounding area, which shows that he is extremely worthy and must have goodness in him, still considers himself to be a fraud and a sinner. ...read more.

John Proctor also realises that by signing his name he will be blackening his friends names and he can not do that, "I have three children, how may I teach them to walk like men in the world and I sold my friends." So at the end of the play John Proctor can make his individual sacrifice because he can finally see some goodness in himself and Elizabeth Proctor knows this so she allows him to go. Although there are many doubts and the majority of the evidence at the end of Act 4 makes and allows the audience to believe that John Proctor is unable to make his individual sacrifice, Proctor is able and goes to his death because he is finally able to see some goodness in himself. He realises this because he can not blacken his friend's names by signing his confession and he can not sign away his name because he knows that in his life he can only have one name and he can never have another one. Another reason why he goes to make his individual sacrifice is because he will not save himself at the cost of his friends and he feels that if he dies now he will die an honest man as he has confessed his sins, which is better than dying later as a liar. By supporting the truth and dying for it John Proctor breaks Danforth's power and the power of theocracy over Salem and it's society. ...read more.