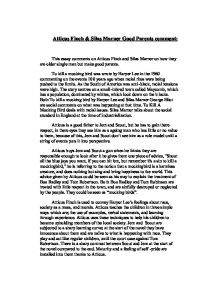 Atticus Finch & Silas Marner Good Parents comment: This essay comments on Atticus Finch and Silas Marner on how they are older single men but make good parents. To kill a mocking bird was wrote by Harper Lee in the 1960 commenting on the events 100 years ago when racial rites were being pushed to the limits. As the South of America was anti-black, racial tensions were high. The story centres on a small-inbred town called Maycomb, which has a population, dominated by whites, which look down on the blacks. Both To kill a mocking bird by Harper Lee and Silas Marner George Eliot are social comments on what was happening at that time. To Kill A Mocking Bird deals with racial issues. Silas Marner talks about the social standard in England at the time of industrialization. Atticus is a good father to Jem and Scout, but he has to gain there respect, in there eyes they see him as a ageing man who has little or no value to them, because of this, Jem and Scout don't see him as a role model until a string of events puts it into perspective. Atticus buys Jem and Scout a gun when he thinks they are responsible enough to look after it he gives them one piece of advice, "Shoot all the blue jays you want, if you can hit 'em, but remember it's a sin to kill a mockingbird," he is referring to the notion that a mockingbird is a harmless creature, and does nothing but sing and bring happiness to the world. This advice given by Atticus could be seen as his way to explain the treatment of Boo Radley and Tom Robertson. Both Boo Radley and Tom Robinson are treated with little respect in the town, and are sinfully destroyed or neglected by the people. They could be seen as "mocking birds". ...read more.

Even though the values of the local people are the opposite with Atticus' strong character, Atticus is not given a choice in defending Tom Robinson, he does not approach his task half-heartedly. He shows to Jem and Scout that he believes in pride, by doing this he knows he can hold his head high in the town and not feel like he let Tom Robertson die without trying to salvage his life. Traditionally the trial would have been a for-gone conclusion condemning a black man, a bit like a gladiatorial mach with a weakened man. Atticus tries to fight to the end to save Tom Robertson, even though it seems like a lost cause. Atticus attempts to explain to Scout "I couldn't go to church and worship God if I didn't try to help that man." He behaves honestly and never compromises his beliefs. Atticus admits, "I've got to live with myself. The one thing that doesn't abide by majority rule is a person's conscience." After the verdict is read and Atticus is leaving the courtroom, he is rewarded with the respect that a true gentleman of his stature deserves. As all the supporters of Tom Robertson in the balcony rise to they're feet in silence recognising a noble man. Many adults tend to underestimate the capabilities of children. Mrs Merryweather finds it necessary to 'talk down' to Scout and thus assumes that Scout is unable to understand the conversation. There are many times in the novel where other adults question the ability for children to understand a particular situation. Rev. Sykes tells Jem to take Scout out of the courtroom during the trial because some of the testimony would not be fit for a young lady's ears. Jem, who has reached adolescence, begins to think more like an adult and insists that Scout can't understand what is going on anyway, so she might as well just stay. ...read more.

When she rejects Godfrey offers to expand their house at no extra cost, this is because he is feeling guilty. Silas turns down the offer, I think he does this because there might be strings attached and by not accepting, he feels safe with Eppie. Silas is a character in village, which people know very little about, but when Eppie arrives it starts to build bridges between the public and him. Children are scared of Silas when he first comes to Ravelo because of his mysterious upbringing. Not much is known about his parents. Silas is looked upon by the children of Ravelo, as a local "cook," a figure to poke fun at. Silas's upbringing leaves him with a blank canvas for Eppie. He can influence her how he sees fit this makes him a good parent, because she grows up to be very much like him. Eppie becomes a humble girl who takes nothing for granted, and try's to help in any way she can. Eppie has few hopes for the future; thanks to Silas she has her feet on the ground, what dreams she has are humble like her. "Silas can we have a garden, wouldn't it be lovely." Silas and Eppie are almost alike at the end of the novel, and both are accepted by the local community, and are very much part of the inner circle. When Eppie is married to Aaron Silas, feels his job of being a complete father is done. When Eppie wants Aaron to move in with her and Silas I think she does this to repay him for all the care he gave her. By this Eppie will look after Silas for the rest of his life. Silas is a good parent because he lets Eppie grow into her own person, he lets her make her own decisions and does not shade her from the world. Where as Atticus Finch who is also a good father, hides his children from the bad things I Maycomb, until he thinks they are ready for the responsibility. ...read more.